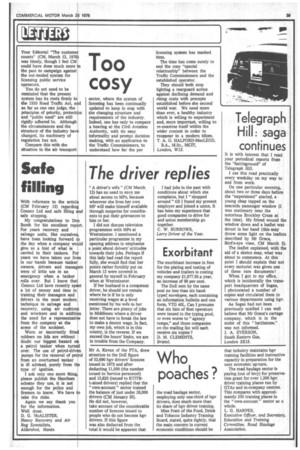 Page 41, 26th March 1976 — Who poaches?
Close
Noticed an error?
If you've noticed an error in this article please click here to report it so we can fix it.
Keywords : Road Haulage Association, Disaster / Accident

Mr A. Kevan of the PTA, drew attention to the DoE figure of 52,690 hgv drivers' licences issued in 1973 and after deducting 11,000 (the number issued to Service personnel) and 15,820 (issued to RTITBtlained drivers) replied that the " own-account " sector trained the balance of just under 26,000 drivers (CM January 30).

He did not, however, take account of the considerable number of licences issued to people who do not become hgv drivers. If this figure was also deducted from the total it would be apparent that the road haulage sector, employing only one-third of hgv drivers, does much more than its share of hgv driver training.

Miss Pratt of the Food, Drink and Tobacco Industry Training Board, stated, quite rightly, that the main concern in current economic conditions should be that industry maintains hgv training facilities and instructive capacity in preparation for the next economic up-turn.

The road haulage sector is paying (out of levy) for preservation grant for over 1,200 hgv driver training places run by GTAs and in-company centres. This compares with approximately 250 training places in the " own-account " sector as a whole.