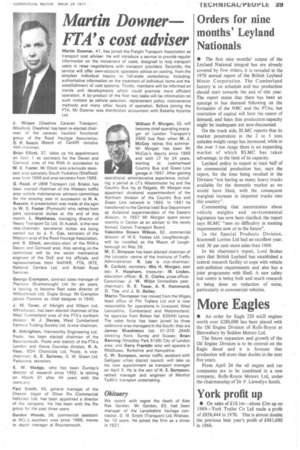 Martin Downer, 41, has joined the Freight Transport Association as transport cost adviser. He will introduce a service to provide regular information on the movement of costs, designed to help transport users in rates negotiations with transport providers. Secondly, the service will offer own-account operators advice on costing, from the simplest individual inquiry to full-scale consultancy. including authoritative information on the treatment of individual items and the establishment of cost systems. Thirdly, members will be informed on trends and developments which could promote more efficient operation. A by-product of the first two tasks will be information on such matters as vehicle selection, replacement policy, maintenance methods and many other facets of operation. Before joining the FTA, Mr Downer was distribution accountant with Bakelite Xylonite Ltd.

Brian Elliott, 37, takes up his appointment on April 1 as secretary for the Devon and Cornwall area of the RHA in succession to W. E. Foster. Mr Elliott was previously assistant area secretary South Yorkshire (Sheffield) area from 1956 and area secretary from 1969.

G. Read, of UBM Transport Ltd, Bristol, has been elected chairman of the Western traffic area vehicle maintenance advisory committee for the ensuing year in succession to H. A. Russett. A presentation was made at the agm to W. E. Foster (Plymouth) who retires from joint secretarial duties at the end of this month. L. Matthews, managing director of Heavy Transport Co Ltd, St Austell, is the new vice-chairman; secretarial duties are being carried out by J. F. Cox, secretary of the Western area of the Road Haulage Association, and B. Elliott, secretary-elect of the RHA's • Devon and Cornwall area. Also serving on the committee will be the senior mechanical engineer of the DoE and his officials, and representatives from NAFWR, FTA, IRTE, National Carriers Ltd, and British Road Services.

E. W. Madge, who has been Dunlop's director of research since 1962. is retiring on March 31 after 44 years with the Company Paul Smith, 45, general manager of the Chester depot of Oliver Rix (Commercial Vehicles) Ltd, has been appointed a director of the company. He has been with the Rix group for the past three years.

Gordon Woods, 36, commercial assistant at NCL's southern area since 1969, moves to depot manager at Bournemouth. William P. Morgan, 52, will become chief operating manager of London Transport's 5500 bus fleet when M. J. McCoy retires this summer. Mr Morgan has been Mr McCoy's deputy since 1965 and with IT for 24 years. starting at Leatherhead Country Bus and Green Line garage in 1947. After gaining operational administrative experience, including a period at LT's Westminster hq and the Country Bus hq at Reigate. Mr Morgan was appointed divisional superintendent of the Northern division of the Country Bus and Green Line network in 1955. In 1961 he transferred to the Central (red) Bus Department as divisional superintendent of the Eastern division. In 1957 Mr Morgan spent seven months in Ceylon as an adviser to the newly formed Ceylon Transport Board.

Valentine Brown Wilson, 62, commercial director of W.S. Yeates Ltd, Loughborough, will be installed as the Mayor of Loughborough on May 26.

Martin Thompson has moved from the Wigan, head office of Pitt Trailers Ltd and is now responsible for operations in Liverpool, West Lancashire, Cumberland and Westmorland; he operates from Bolton (tel. 63544) Lancs. The sales force has been joined by three additional area managers in the South: they are James Shackleton (tel. 01-370 2648) covering Kent, Surrey and Sussex; Brian Banning (Woodley Park 51661 City of London area; and Gerry Franklin who will operate in Middlesex, Berkshire and Hampshire.

C. W. Sampson, senior traffic assistant with Gelligaer urban district council, will take up his new appointment as transport manager on April 5. He is the son of H. E. Sampson, retired manager and engineer of Merthyr Tydfil's. transport undertaking.

We record with regret the death of Alex Rae Gordon. Mr Gordon, 63, had been manager of the Lanarkshire haulage contractor. D. M. Smith (Transport) Ltd, Wishaw, for 10 years. He joined the firm as a driver in 1921.