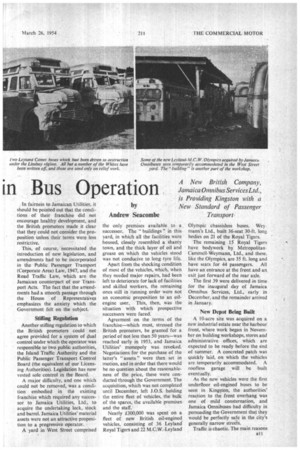 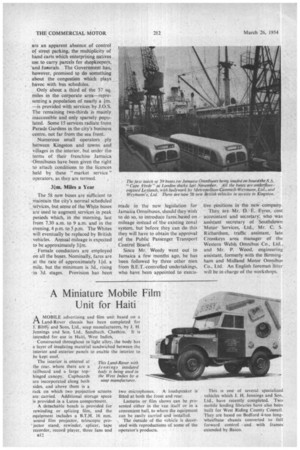 In fairness to Jamaican Utilities, it should be pointed out that the conditions of their franchise did not encourage healthy development, and the British promoters made it clear that they could not consider the proposition unless their, terms were less restrictive.

This, of course, necessitated the introduction of new legislation, and amendments had to be incorporated in the Public Passenger Transport (Corporate Area) Law, 1947, and the Road Traffic Law, which are the Jamaican counterpart of our Transport Acts. The fact that the amendments had a smooth passage through the House of Representative,s emphasizes the anxiety which the Government felt on the subject.

Stiffing Regulation Another stifling regulation to which the British promoters could not agree provided for a system of dual control under which the operator was responsible to two public authorities, the Island Traffic Authority and the Public Passenger Transport Control Board the equivalent of our. Licensing Authorities). Legislation has now vested sole control in the Board.

A major difficulty, and one which could not be removed, was a condition embodied in the existing franchise which required any successor to Jamaica Utilities, Ltd., to acquire the undertaking lock, stock and barrel. Jamaica Utilities' material assets were not an attractive proposition to a progressive operator.

A yard in West Street comprised the only premises available to a successor. The " buildings" in this yard, in which all the facilities were housed, closely resembled a shanty town, and the thick layer of oil and grease on which the vehicles stood was not conducive to long tyre life.

Apart from the shocking condition of most of the vehicles, which, when they needed major repairs, had been left to deteriorate for lack of facilities and skilled workers, the remaining ones still in running order were not an economic proposition to an oilengine user.. This, then, was the situation with which prospective successors were faced.

Agreement on the .terms of the franchise—which must, stressed the British promoters, be granted for a period of not less than 50 years—was reached early in 1953, and Jamaica Utilities' monopoly was. revoked. Negotiations for the purchase of the latter's " assets " were then set in motion, and in order that there would be no question about the reasonableness of the price, these were conducted through the Government. The acquisition, which was not completed until December, left J.O.S. holding the entire fleet of vehicles, the bulk of the spares, the available premises• and the staff.

Nearly 000,000 was spent on a fleet of new British oilengineff vehicles, consisting of 36 Leyland Royal Tigers and 22 M.C.W.-Leyland

The remaining 15 Royal Tigers have bodywork by MetropolitanCaramell-Weyrnann, Ltd., and these, like the Olympics, are 35 ft. long and have seats for 44 passengers. All have an entrance at the front and an exit just forward of the rear axle.

The first 39 were delivered in time for the inaugural day of Jamaica Omnibus Services, Ltd., early in December, and the remainder arrived in January.

A 10-acre site was acquired on a new industrial estate near the harbour front, where work began in November on building workshops, stores and administrative offices, which are expected to be ready before the end of summer. A concreted patch was quickly laid, on which the vehicles are temporarily accommodated. A roofless garage will be built eventually.

As the new vehicles were the first underfloor oil-engined buses to be seen in Kingston, the authorities' reaction to the front overhang was one of mild consternation, and Jamaica Omnibuses had difficulty in persuading the Government that they would be perfectly safe in the city's generally narrow streets.

are an apparent absence of control of street parking, the multiplicity of hand carts which enterprising natives use to carry parcels for shopkeepers, and funerals. The Government has, however, promised to do something about the congestion which plays havoc With bus schedules.

Only about a third of the 37 sq. miles in the corporate area—representing a population of nearly a m. --is provided with services by J.O.S. The remaining two-thirds is mainly inaccessible and only sparsely populated. Some 15 services radiate from Parade Gardens in the city's business centre, not far from the sea front.

Numerous small operators ply between Kingston and towns and villages in the interior, but under the terms of their franchise Jamaica • Omnibuses have been given the right to attach conditions to the licences held by these "market service " operators, as they are termed.

3fin. Miles a Year The 58 new buses are sufficient to maintain the city's normal scheduled services, but some of the White buses are used to augment. services in peak periods which, in the morning, last from 7.30 a.m. to 9 a.m. and in the evening, 4 p.m. to 5 p.m. The Whites will eventually be replaced by British vehicles. Annual mileage is expected to be approximately 31m.

. Female conductors are employed on all the buses. Nominally, fares are at the rate of approximately 11d. a mile, but the minimum is 3d., rising 'in 3d. stages. Provision has been

made in the new legislation for Jamaica Omnibuses, should they wish to do so, to introduce fares.based on mileage instead of the existing zonal system, but before they can do this they will have to obtain the approval of the Public Passenger Transport Control Board.

Since Mr. Weedy went out to Jamaica a few months ago, he has been followed by three other men from B.E.T.-controlled undertakings, who have been appointed to execu tive positions in the new company. They are Mr. D. E Eyres, cost accountant and secretary; who was assistant secretary of Southdown Motor Services, Ltd., Mr. C. . S. Richardson, traffic assistant, late Crosskeys area manager of the Western Welsh Omnibus Co., Ltd., and Mr. P. Wood, engineering assistant, formerly with the Birmingham and Midland Motor Omnibus Co., Ltd. An English foreman fitter will be in charge of the workshops,