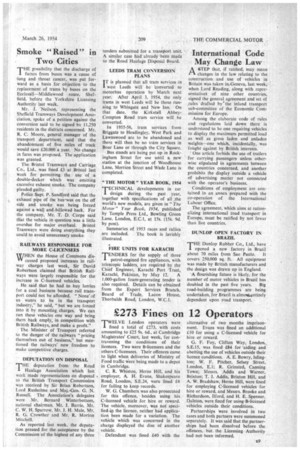 Page 44, 26th March 1954 — RAILWAYS RESPONSIBLE FOR MORE C-LICENSEES WHEN the House of Commons disVV cussed proposed increases in rail
Close
Noticed an error?
If you've noticed an error in this article please click here to report it so we can fix it.
Keywords : Transport, Rail Transport, Trains, Salter Report, Business / Finance

He said that he had to buy lorries for a coal business because rail transport could not be afforded. " None' of us wants to be in the transport industry," he said, "but we are forced into it by mounting charges. We can run these vehicles one way and bring them back empIy, in competition with British Railways, and make a profit.'

The Minister of Transport referred to the danger of the railways "pricing themselves out of business," but mentioned the railways' new freedom to make competitive charges.