Refused More than Money's Worth 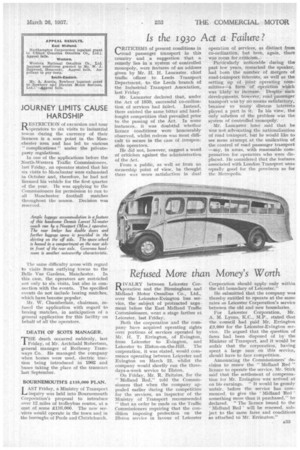 Page 51, 26th March 1937 — Refused More than Money's Worth
Close
Noticed an error?
If you've noticed an error in this article please click here to report it so we can fix it.
Keywords : Leicester, Arriva Fox County, Midland Red, Evington, Business / Finance, Law / Crime

RIVALRY between Leicester Corporation and the Birmingham and Midland Motor Omnibus Co., Ltd., over the Leicester-Evington bus service, the subject of protracted argument before the East Midland Traffic Commissioners, went a stage farther at Leicester, last Friday.

On Friday, Mr. R. Britzius, for the "Midland Red," told the Commissioners that when the company appealed earlier during the competition for the services, an inspector of the Ministry of Transport recommended " that an order be made on the Traffic Commissioners requiring that the condition imposing protection on the Elston service in favour of Leicester Corporation should apply only within the old boundary of Leicester."

He submitted that the company was thereby entitled to operate at the same rates as Leicester Corporation's service between the old and new boundaries.

For Leicester Corporation, Mr. A. M. Lyons, K,C., M.P., stated that the council had paid Mr. Errington £3,000 for the Leicester-Evington service. He argued that the question of fares had been disposed of by the Minister of Transport, and it would be unfair that the corporation, having spent a large sum on this service, should have to face competition.

Announcing the Commissioners decision to renew the " Midland Red " licence to operate the service, Mr. Stirk said that the settlement of compensation for Mr. Errington was arrived at on his earnings. " It would be grossly unfair, before the service has commenced, to give the 'Midland Red' something more than it purchased," he declared. "The licence issued to the ' Midland Red' will be renewed, subject to the same fares and conditions as attached to Mr. Errington,"