One Hears— Of battery rattling. 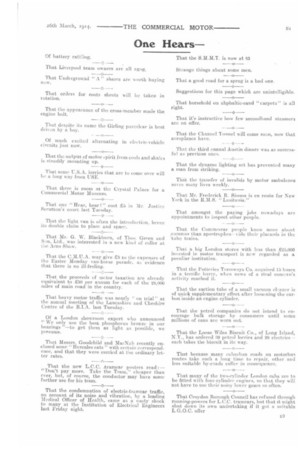 Page 5, 26th March 1914 — One Hears— Of battery rattling.
Close
Noticed an error?
If you've noticed an error in this article please click here to report it so we can fix it.
Keywords : Light Rail, Tram, Sprag

That Liverpool team owners are all agog.

That Underground " A " shares are worth buying 110W.

That orders for costs sheets will be taken in rotation.

That the appearance of the cross-member made the engine bolt.

That despite its name the Girling pateelear is best driven by a boy.

Of much excited alternating in electric-vehicle circuits just now.

That the output of motor spirit from coals and shales is steadily mounting up.

That seine U.S.A. lorries that are to come over will be a long way from USE.

That there is room at the Crystal Palace for Commercial Motor Museum.

That the light van is often the introduction, herce its double claim to place and space.

That Mr. G. W. Blackburn, of Thos. Green and San, Ltd.. was interested in a new kind of roller at the Aero Show.

That the C.M.U.A. may give 25 to the expenses of the Easter Monday van-horse parade, as evidence that there is no ill-feeling.

That the proceeds of motor taxation are already equivalent to 50 per annum for each of the 28,000 miles of main road in the country.

That heavy motor traffic was nearly " on trial" at the annual meeting of the Lancashire and Cheshire Centre of the RI. A. last Tuesday.

Of a London showroom expert who announced " We only use the best phosphorus bronze in our bearings get them as light as possible, we presume.

That Messrs. Goodchild and I4.1a,eNab recently enclosed some " Hercules eats " with certain em.respondence, and that they were carried at the ordinary letter rates.

That the new L.C.C. ,tramcar posters read :"Don't pay more. Take the Tram." cheaper than ever, but, of course, the conductor may have some further use for his tram.

That the condemnation of electric-tramcar traffic, on account of its noise and vibration, by a leading Medical Officer of Health, came, as a nasty shock to many at the Institution of Electrical Engineers last Friday night. That the S.M.M.T. is now at 83 Strange things about some men.

That a good road for a sprag is a bad one.

Suggestions for this page which are unintelligible.

That it's instructive how few secondhand steamers are on offer.

That the Channel Tunnel will come soon, now that aeroplanes have.

That the third annual Austin dinner was as successful as previous ones.

That the dynamo lighting set has prevented many a man from striking.

Thiit the transfer of invalids by motor ambulance saves many lives weekly.

That Mr. Frederick B. Simms is en route for New York in the R.M.S. " Lusitania.".

That amongst the paying jobs nowadays are appointments to inspect other people.

That the Commercar people know more about .commas than apostrophes—vide their placards in the 'tube trains.

That a big London stores with less than 225,000 invested in motor transport is now regarded as a peculiar institution.

That the Potteries Tramways Co. acquired 15 buses in a terrific hurry, when news of a rival concern's activity reached it.

That the suction tube. of a small vacuum cleaner is of quick supplementary effect after loosening the carbon inside. an engine cylinder.

That the petrol companies do not intend to encourage bulk storage by consumers until some millions of cans arc worn out.

That the Loose Wiles Biscuit Co., of Long Island, N.Y., has ordered 39 petrol lorries and 28 eleetrieseach takes the biscuit in ite way.

That because many :feburban roads on moterbua routes take such a long time to repair, other and less suitable by-roads suffer in consequence.

That many of the two-cylinder London cabs are to be fitted with four-cylinder engines, so that they will not have to use their noisy lower gears so often.

That Croydon Borough Council has refused through running-powers for L.C.C. tramcars, but that it might shut down its own undertaking if it got a suitable L.G.O.C. offer