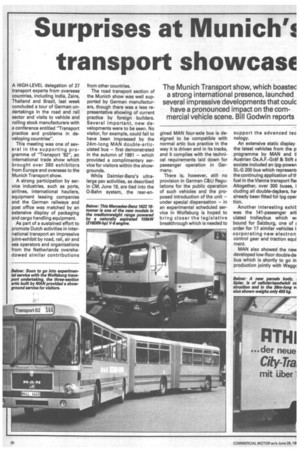 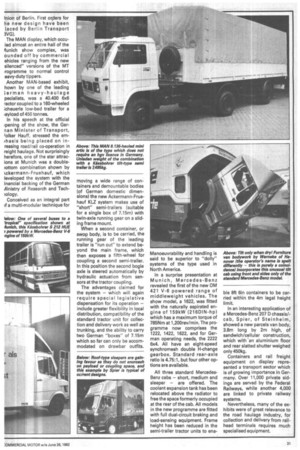 Page 20, 26th June 1982 — Surprises at Munich transport showcase
Close
Noticed an error?
If you've noticed an error in this article please click here to report it so we can fix it.

A HIGH-LEVEL delegation of 27 transport experts from overseas countries, including India, Zaire, Thailand and Brazil, last week concluded a tour of German undertakings in the road and rail sector and visits to vehicle and rolling stock manufacturers with a conference entitled "Transport practice and problems in developing countries".

This meeting was one of several in the supporting programme of "Transport '82", an international trade show which brought over 380 exhibitors from Europe and overseas to the Munich Transport show.

A strong participation by service industries, such as ports, airlines, international hauliers, equipment leasing companies and the German railways and post office was matched by an extensive display of packaging and cargo handling equipment.

As part of a sustained effort to promote Dutch activities in international transport an impressive joint-exhibit by road, rail, air and sea operators and organisations from the Netherlands overshadowed similar contributions from other countries.

The road transport section of the Munich show was well supported by German manufacturers, though there was a less representative showing of current practice by foreign builders. Several important, new developments were to be seen. No visitor, for example, could fail to have been impressed by the 24m-long MAN double-articulated bus — first demonstrated in the autumn of 1981 — which provided a complimentary service for visitors within the showgrounds.

While Daimler-Benz's ultralarge psv activities, as described in CM, June 19, are tied into the O-Bahn system, the rear-en gined MAN four-axle bus is designed to be compatible with normal artic bus practice in the way it is driven and in its tracks, and it complies with the technical requirements laid down for passenger operation in Germany.

There is, however, still no provision in German C&U Regulations for the public operation of such vehicles and the proposed introduction of the unit — under special dispensation — in an experimental scheduled service in Wolfsburg is hoped to bring closer the legislative breakthrough which is needed to support the advanced tec nology.

An extensive static display the latest vehicles from the p programme by MAN and tl Austrian Oe.A.F.-Graf & Stift 13 sociate included an lpg-powen SL-G 200 bus which representi the continuing application of th fuel in the Vienna transport flei Altogether, over 300 buses, i cluding all double-deckers, ha, already been fitted for lpg oper tion.

Another interesting exhit was the 141-passenger arti ulated trolleybus which oh bound for Salzburg, one of order for 17 similar vehicles i corporating new electron control gear and traction equi ment.

MAN also showed the new developed low-floor double-del bus which is shortly to go in production jointly with Waggc Inion of Berlin. First orders for he new design have been laced by Berlin Transport 3VG).

The MAN display, which occuied almost an entire hall of the lunich show complex, was ounded off by commercial ehicles ranging from the new silenced" versions of the MT Frogramme to normal control eavy-duty tippers.

Another MAN-based exhibit, hown by one of the leading ierman heavy-haulage pecialists, was a 40.400 6x6 rector coupled to a 160-wheeled lcheuerle low-bed trailer for a iayload of 450 tonnes.

In his speech at the official ipening of the show, the Gernen Minister of Transport, folker Hauff, stressed the emohasis being placed on inreasing road/rail co-operation in reight haulage. Not surprisingly herefore, one of the star attracions at Munich was a double*nom combination shown by kckermann-Fruehauf, which leveloped the system with the inancial backing of the German Ainistry of Research and Tech Conceived as an integral part If a multi-modular technique for moving a wide range of containers and demountable bodies (of German domestic dimensions) the new Ackermann-Fruehauf KLZ system makes use of "short" semi-trailers (suitable for a single box of 7.15m) with twin-axle running gear on a sliding frame mount.

When a second container, or swop body, is to be carried, the running gear of the leading trailer is "run out" to extend beyond the main frame, which then exposes a fifth-wheel for coupling a second semi-trailer. In this position the second bogie axle is steered automatically by hydraulic actuation from sensors at the tractor coupling.

The advantages claimed for the system — which will again require special legislative dispensation for its operation — include greater flexibility in local distribution, compatibility of the standard tractor unit for collection and delivery work as well as trunking, and the ability to carry two German "boxes" of 7.15m which so far can only be accommodated on drawbar outfits. Manoeuvrability and handling is said to be superior to "dolly" systems of the type used in North America.

In a surprise presentation at Munich, Mercedes-Benz revealed the first of the new OM 421 V-6 powered range of middleweight vehicles. The show model, a 1622, was fitted with the naturally aspirated engine of 159kW (216DIN-hp) which has a maximum torque of 785Nm at 1,200rev/min. The programme now comprises the 1222, 1422, 1622, and for German operating needs, the 2222 6x4. All have an eight-speed synchromesh double H-change gearbox. Standard rear-axle ratio is 4.75:1, but four other options are available.

All three standard MercedesBenz cabs — short, medium and sleeper — are offered. The coolant expansion tank has been relocated above the radiator to free the space formerly occupied at the rear of the cab. All models in the new programme are fitted with full dual-circuit braking and load-sensing equipment. Frame height has been reduced in the semi-trailer tractor units to ena ble 8ft 6in containers to be carried within the 4m legal height limit.

In an interesting application of a Mercedes-Benz 207 D chassis/ca b, Spier, of Steinheim, showed a new parcels van body, 3.8m long by 2m high, of sandwich/cellular construction, which with an aluminium floor and rear slatted shutter weighed only 450kg.

Containers and rail freight equipment on display represented a transport sector which is of growing importance in Germany. Over 11,000 private sidings are served by the Federal Railways, while another 4,000 are linked to private railway systems.

Nevertheless, many of the exhibits were of great relevance to the road haulage industry, for collection and delivery from railhead terminals requires much specialised equipment.