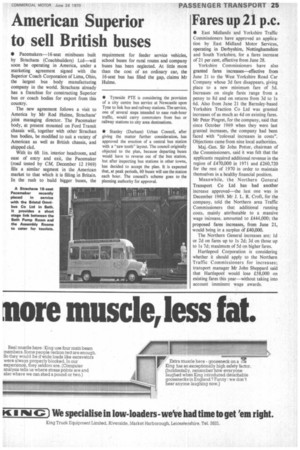 • Pacemakers-16-seat minibuses built by Strachans (Coachbuilders) Ltd—will soon be operating in America, under a marketing agreement signed with the Superior Coach Corporation of Lima, Ohio, the largest bus body manufacturing company in the world. Strachans already has a franchise for constructing Superior bus or coach bodies for export from this country.

The new agreement follows a visit to America by Mr Rod Huline, Strachans' joint managing director. The Pacemaker body, at present mounted on Ford Transit chassis will, together with other Strachan bus bodies, be modified to suit a variety of American as well as British chassis, and shipped ckd.

With its 6ft lin. interior headroom, and ease of entry and exit, the Pacemaker (road tested by CM, December 12 1969) fills a similar segment in the American market to that which it is filling in Britain. In the rush to build bigger buses, the requirement for feeder service vehicles, school buses for rural routes and company buses has been neglected. At little more than the cost of an ordinary car, the 16-seat bus has filled the gap, claims Mr Hulme.