A NEW CHEVROLET FOR ONE-TON 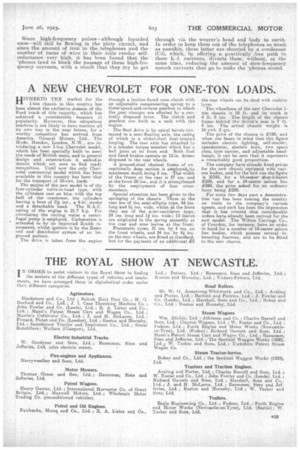 Page 21, 26th June 1923 — A NEW CHEVROLET FOR ONE-TON
Close
Noticed an error?
If you've noticed an error in this article please click here to report it so we can fix it.

HITHERTO THE market for the 1-ton cbassis in this country has been almost the exclusive domain of the Ford truck of this capacity, which has achieved a considerable measure of popularity. However, this ubiquitous machine IS not likely to have matters all its own way in the near future, for a Worthy, competitor has arrived from America. General Motors, -Ltd., The Hyde, Hendon, London, N.W., are introducing a new 1-ton Chevrolet Model, which has been specially built to meet the needs of British users, and in general • iiesign arid construction it earthed:es details which are sure to find ready recognition. Until now the only Chevrolet commercial model which has been available in this country has been that for the transport of 10-cwt. loads. The engine of the new model is of the four-cylinder valve-in-head type, with the cylinders cast en bloc with the top half of the crankcase, the cylinders having a bore of 3[11. ins., a 4-in. stroke

• and a detachable head. The R.A.C. rating of the engine is 21.7 h.P. For circulating the cooling water a centrifugal pump is employed. Carburation is attended to by an improved Zenith instrument, whilst ignition is by the Remy coil and distributor system of an improved pattern. The drive is taken from the engine

through a leather-faced cone clutch With an adjustable compensating pring to a three-speed-and-reverse gearbox in which the gear changes are effected by a CCri. trally disposed lever. The clutch and gearbox are built as a unit with the engine.

The final drive is by spiral bevels con-tamed in a 8erni-floating axle, the casing of which is a nickel-steel heat-treated forging: The rear axle has attached to it a tubular torque member which has a ball joint at its front end. Both foot and hand brakes operate on 12-in, drums disposed in the rear wheels.

A pressed-steel "channel frame of exceptionally deep section is employediits maximum depth being 5 ins. The width 'of the frame at the rear is 37 ins, and at the front 28 ins., and it is strengthened by the employment of four crossmembers.

-Special attention has been given to the springing of the chassis. Those at the rear are of the semi-elliptic type, 44. ins. long and 2i ins, wide, whilst at the front they are of the . semi-cantilever type, 24 ins, long and l ins. wide ; 12 leaves are employed in the spring assembly at the rear and nine leaves at the front.

Pneumatic tyres, 31 ins. by 4 ins. on the front wheels, and 34 ins. by 4i ins. on the rear wheels, are fitted as stanclarei, but for the payment of an additional E5

the rear wheela can be shod with cushion tyres.' The wheelbase of the new Chevrolet 1ton chassis is 10 IL and its track is • 4 ft. 8 ins. The length of the chassis frame behind the driver's seat is 7 fL 4 ins. The actual . chassis weight is 16 cwt. 2 qrs. The price of the chassis is £190, and when one bears in mind that this figure includes electric lighting, self-starter, speedometer, electric horn, two spare rims, tyre carrier, and adjustable headlamps, it can be seen that it represents a remarkably good proposition.

The company have already fixed prices for the new chassis equipped with various bodies, and for the box van the figure is '£245, for a 14-seater char-a-bancs £350, and for a 14-seater saloon bus £350, the price asked for . an ordinary lorry being £230.

For some few days past a demonstration van has been touring the country on visits to the company's various agents, and such has been the impression that it has created that considerable

orders have already been recived for the new model. The 'Wilton Carriage Co., of Croydon, for instance, have an order in hand for a number of 14-seater saloon . bus bodies, Which possess several interesting features, and are to be fitted to the new clitw;is.