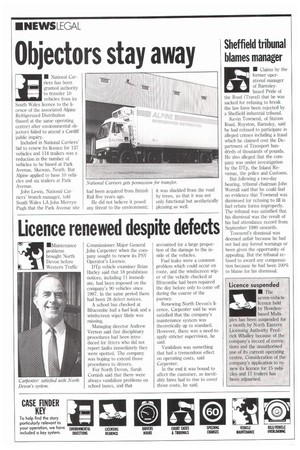 Page 20, 26th July 1990 — Sheffield tribunal blames manager
Close
Noticed an error?
If you've noticed an error in this article please click here to report it so we can fix it.
Keywords : Law / Crime

• Claims by the former operational manager of Barnsleybased Pride of the Road (Travel) that he was sacked for refusing to break the law have been rejected by a Sheffield industrial tribunal.

Kevin Townend, of Station Road, Royston, Barnsley, said he had refused to participate in alleged crimes including a fraud which he claimed cost the Department of Transport hundreds of thousands of pounds. He also alleged that the company was under investigation by the DTp, the Inland Revenue, the police and Customs.

But following a two-day hearing, tribunal chairman John Worrall said that he could find no evidence that Townend was dismissed for refusing to fill in fuel rebate forms improperly. The tribunal was satisified that his dismissal was the result of his bad attendance record from September 1989 onwards.

Townend's dismissal was deemed unfair because he had not had any formal warnings or been given the opportunity of appealing. But the tribunal refused to award any compensation because he had been 100% to blame for his dismisa1.