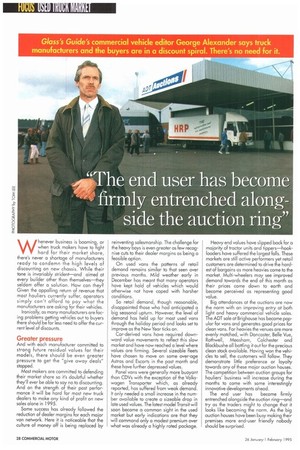 side the auction ring"

Whenever business is booming, or when truck makers have to fight hard for their market share, there's never a shortage of manufacturers ready to condemn the high levels of discounting on new chassis. While their tone is invariably strident—and aimed at every builder other than themselves—they seldom offer a solution. How can they? Given the appalling return of revenue that most hauliers currently suffer, operators simply can't afford to pay what the manufacturers are asking for their vehicles.

Ironically, as many manufacturers are facing problems getting vehicles out to buyers there should be far less need to offer the current level of discounts.

And with each manufacturer committed to strong future residual values for their models, there should be even greater pressure to get the "give away deals" stopped.

Most makers are committed to defending their market share so it's doubtful whether they'll ever be able to say no to discounting. And on the strength of their past performance it will be hard for most new truck dealers to make any kind of profit on new sales alone in 1995.

Some success has already followed the reduction of dealer margins for each major van network. Here it is noticeable that the culture of money off is being replaced by

reinventing salesmanship. The challenge for the heavy boys is even greater as few recognise cuts to their dealer margins as being a feasible option.

On used vans the patterns of retail demand remains similar to that seen over previous months. Mild weather early in December has meant that many operators have kept hold of vehicles which would otherwise not have coped with harsher conditions.

So retail demand, though reasonable, disappointed those who had anticipated a big seasonal upturn. However, the level of demand has held up for most used vans through the holiday period and looks set to improve as the New Year ticks on. Car-derived vans have required downward value movements to reflect this slow market and have now reached a level where values are firming. Several sizeable fleets have chosen to move on some over-age Astras and Escorts in the past month and these have further depressed values.

Panel vans were generally more buoyant than CDVs with the exception of the Volkswagen Transporter which, as already reported, has suffered from weak demand. It only needed a small increase in the number available to create a sizeable drop in late used values. The latest model Transit will soon become a common sight in the used market but early indications are that they will command only a modest premium over what was already a highly rated package.

Heavy end values have slipped back for a majority of tractor units and tippers—hookloaders have suffered the largest falls. These markets are still active performers yet retail customers are determined to drive the hardest of bargains as more heavies come to the market. Multi-wheelers may see improved demand towards the end of this month as their prices come down to earth and become perceived as representing good value.

Big attendances at the auctions are now the norm with an improving entry at both light and heavy commercial vehicle sales. The ADT sale at Brighouse has become popular for vans and generates good prices for clean vans. For heavies the venues are more evenly matched, with Doncaster, Belle Vue, Rothwell, Measham, Colchester and Blackbushe all battling it out for the precious clean stock available. Having won the vehicles to sell, the customers will follow. They demonstrate little preference or loyalty towards any of these major auction houses. The competition between auction groups for hauliers' business will increase during the months to come with some interestingly innovative developments ahead. The end user has become firmly entrenched alongside the auction ring—and try as the traders might to change that it looks like becoming the norm. As the big auction houses have been busy making their premises more end-user friendly nobody should be surprised.