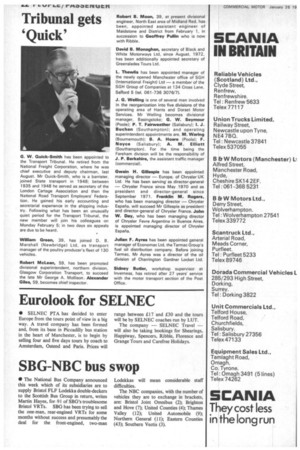 • The National Bus Company announced this week which of its subsidiaries are to supply Bristol FLF Lodekka double-deckers to the Scottish Bus Group in return, writes Martin Hayes, for 91 of SBG's troublesome Bristol VRTs. SBG has been trying to sell the one-man, rear-engined VRTs for some months without success and presumably the deal for the front-engined, two-man Lodekkas will mean considerable staff difficulties.

The NBC companies, with the number of vehicles they are to exchange in brackets, are: Bristol Joint Omnibus (2); Brighton and Hove (7); United Counties (4); Thames Valley (12); United Automobile (9); Northern General (11); Eastern Counties (43); Southern Vectis (3).