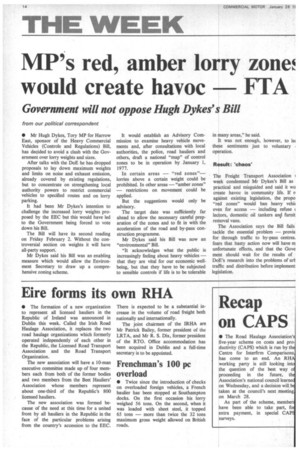 from our political correspondent • Mr Hugh Dykes, Tory MP for Harrow East, sponsor of the Heavy Commercial Vehicles (Controls and Regulations) Bill, has decided to avoid a clash with the Government over lorry weights and sizes.

After talks with the DoE he has dropped proposals to lay down maximum weights and limits on noise and exhaust emission, already covered by existing regulations, but to concentrate on strengthening local authority powers to restrict commercial vehicles to specified routes and on lorry parking.

It had been Mr Dykes's intention to challenge the increased lorry weights proposed by the EEC but this would have led to the Government being forced to vote down his Bill.

The Bill will have its second reading on Friday February 2. Without the controversial section on weights it will have all-party support.

Mr Dykes said his Bill was an enabling measure which would allow the Environment Secretary to draw up a comprehensive zoning scheme. It would establish an Advisory Commission to examine heavy vehicle movements and, after consultations with local authorities, the police, road hauliers and others, draft a national "map" of control zones to be in operation by January 1, 1977.

In certain areas — "red zones"— lorries above a certain weight could be prohibited. In other areas — "amber zones" — restrictions on movement could be applied.

But the suggestions would only be advisory.

The target date was sufficiently far ahead to allow the necessary careful preparation of the zones and to fit in with the acceleration of the road and by-pass construction programme.

Mr Dykes said his Bill was now an "environmental" Bill.

"It acknowledges what the public is increasingly feeling about heavy vehicles — that they are vital for our economic wellbeing, but that they have to be subjected to sensible controls if life is to be tolerable in many areas," he said.

It was not enough, however, to le; these sentiments just to voluntary operation.

Result: 'chaos' The Freight Transport Association 1 week condemned Mr Dykes's Bill as practical and misguided and said it wo create havoc in community life. If n against existing legislation, the propo "red zones" would ban heavy vehic even for access — including refuse ( lectors, domestic oil tankers and furnit removal vans.

The Association says the Bill fails tackle the essential problem — provis for through traffic to by-pass centres. fears that hasty action now will have m unfortunate effects, and that the Gove ment should wait for the results of DoE's research into the problems of urt traffic and distribution before implement] legislation.