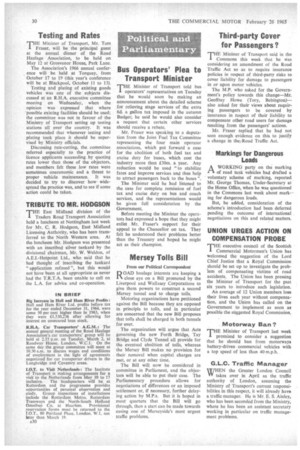 Page 32, 26th February 1965 — Markings for Dangerous Loads
Close
Noticed an error?
If you've noticed an error in this article please click here to report it so we can fix it.
Keywords : Politics

A WORKING party on the marking 1-1 of road tank vehicles had drafted a voluntary scheme of marking, reported Mr. George Thomas, Under-Secretary at the Home Office, when he was questioned in the Commons last week about mark-• ing for dangerous loads.

But, he added, consideration of the scheme's introduction had been deferred pending the outcome of international negotiations on this and related matters.