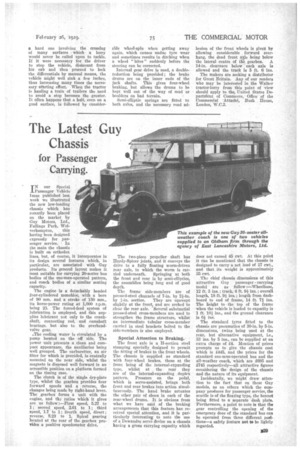 Page 55, 26th February 1929 — The Latest Guy Chassis
Close
Noticed an error?
If you've noticed an error in this article please click here to report it so we can fix it.
Keywords : Thames 400e

TN our Special ',Passenger Vehicle Issue published last week we illustrated the new low-loading chassis which has recently been placed on the market by Guy Motors, Ltd., Fallings Park, Wol verhampton, this having been designed expressly for pas senger service. In the main the chassis is built on orthodox lines, but, of course, it incorporates in its design several features which, in particular, are associated with Guy products. Its general layout makes it most suitable for carrying 20-seater bus bodies of the one-man-operated pattern, and coach bodies of a similar seating capacity.

The engine is a detachably headed four-cylindered monobloe, with a bore of 90 mm. and a stroke of 130 mm., its horse-power rating at 1,000 r.p.m. being 23. The forced-feed system of lubrication is employed, and this supplies lubricant not only to the crankshaft, connecting rod, and camshaft bearings, but also to the overheadvalve gear.

-The cooling water is circulated by a pump located on the off side. The Power unit presents a clean and compact appearance, the auxiliaries being well grouped. The carburetter, an air filter for which is provided, is centrally mounted on the near side, whilst the magneto is disposed well forward in an aceessible position on a platform formed on the timing case.

The 'clutch is of the single dry-plate type, whilst• the gearbox provides four forward speeds and a reverse the • changes being made by right-hand lever. The ,gearbox forms a unit with the engine, and th,-. ratios which it gives are as follow :—First speed, 527 to 1; second speed, 2.61 to 1; third Speed, 1.7 to 1; fourth speed, direct; reverse, 8.23 to 1. Spiral gearing located at the rear of the gearbox provides a positive speedometer drive.

Hardy-Spicer joints and it conveys the

drive to a fully joints, worm-driven rear axle, in which the worm is car

ried underneath.. Springing at both the front and rear is by semi-ellipties, the assemblies being long and of good depth.

The. frame side-members are of pressed-steel channels of 7-in. by 2i-in.

by 1-in. section. They are upswept slightly at the front, and are arched to .clear the rear axle. Several substantial pressed-steel cross-members are used to strengthen the frame structure, whilst an intermediate tubular cross-member carried in steel brackets bolted to the side-members is also employed.

The front axle is a H-section steel stamping sneeially designed to permit the fitting of brakes to the front wheels. The chassis is supplied as standard with four-wheel brakes, those at the front being of the internal-expanding type, whilst at the rear they are of the internal-expanding duplex pattern. Pressure on the pedal, which is servo-assisted, brings both front and rear brakes into action simultaneously. The hand brake actuates the other pair of shoes in each of the rear-wheel drums. It is obvious from what we have said of the braking arrangements that this feature has received special attention, and it is particularly interesting to note the use of a Dewandre servo device on a chassis having a gross carrying capacity which

does net exceed 45 cwt. At this point it can be mentioned that the chassis is designed to carry a net load of 27 cwt., and that its weight is approximately 35 cwt.

The standard tyres fitted to the chassis are pneumatics of 30-in. by 5-in. dimensions, twins being used at the rear, but alternative equipment, i.e., 33 ins. by 5 ins., can be supplied at an extra charge of £4. Mention of prices prompts us to give the chassis cost which is £445, and the prices for the standard one-man-operated bus and the all-weather coach, which are £695 and £745 respectively—all attractive figures considering the design of the chassis and the nature of its equipment.

Incidentally, we might draw attention to the fact that on these Guy models, as on others which tbe. company produces for passenger service, the scuttle is of the floating type, the bonnet being fitted to a separate dash plate. Furthermore, a point to note is that the gear controlling the opening of the emergency door of the standard bus can he operated from three different positions—a safety feature not to be lightly regarded.