Where Lies Our Salvation? 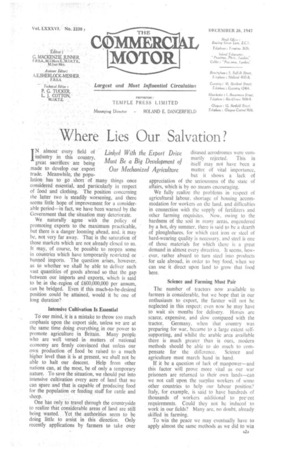 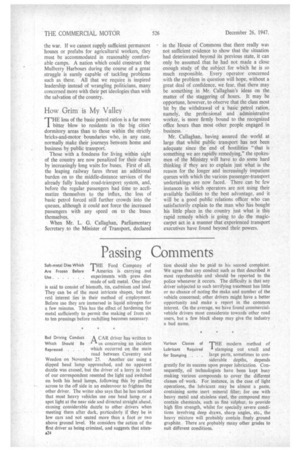 Page 25, 26th December 1947 — Where Lies Our Salvation?
Close
Noticed an error?
If you've noticed an error in this article please click here to report it so we can fix it.
Keywords : Administration, Disaster Preparedness, Rationing, Business, Political Science

IN almost every field of industry in this country, great sacrifices are being made to develop our export trade. Meanwhile, the population has to go short of many things once considered essential, and particularly in respect of food and clothing. The position concerning the latter two is steadily worsening, and there seems little hope of improvement for a considerable period—in fact, we have been warned by the Government that the. situation may deteriorate.

We naturally agree with the policy of promoting exports to the maximum practicable, but there is a danger looming ahead, and, it may be, not very far away. That is the saturation of those markets which are not already closed to us. It may, of course, be possible to reopen some in countries which have temporarily restricted or banned imports. The question arises, however, as to whether we shall be able to deliver such vast quantities of goods abroad so that the gap between our imports and exports, which is said to be in the-Tegion of £.600,000,000 per annum, can be bridged. Even if this much-to-be-desired position could be attained, would it be one of long duration?

Intensive Cultivation Is-Essential To our mind, it is a mistake to throw too much emphasis upon the export side, unless we are at the same time doing everything, in our power to promote agriculture in Britain. Many people who are well versed in matters of national economy are firmly convinced that unless our own production of ,food be raised to a much higher level than it is at present, we shall not be able to halt our descent. Help from other nations can, at the most, be of only a temporary nature. To save the situation, we should put into intensive cultivation every acre of land that we can spare and that is capable of producing food for the population or feeding stuff for cattle and sheep.

One has only to travel through the countryside to realize that considerable areas of land are still being wasted. Yet the authorities seem to be doing little to assist in this direction. Only recently applications by farmers to take over disused aerodromes were summarily rejected. This in itself may not have been a matter of vital importance, but it shows a lack of appreciation of the seriousness of the state of affairs, which is by no means encouraging.

We fully realize the problems in respect of agricultural labour, shortage of housing accommodation.for workers on the land, and difficulties in connection with the. supply of fertilizers and other farming .requisites. Now, owing to the hardness of the soil in many areas, engendered by a hot, dry summer, there is said to be a dearth of ploughshares, for which cast iron or steel of hard-wearing quality is necessary, and steel is one of those materials for which there is a great demand in almost every direction. It seems. however, rather absurd to turn steel into products for sale abroad, in order to buy food, when we can use it direct upon land to grow that food here.

Science and Farming Must Pair The number of tractors now available to farmers is considerable, but we hope that in our enthusiasm to export, the farmer will not be neglected in this respect; even now he may have to wait six months for delivery. Horses arc scarce, expensive, and slow compared with the tractor. Germany, when that country was preparing for war, became to a large extent selfsupporting, and whilst the arable area available there is much greater than is ours, modern methods should be able to do much to compensate for the difference. Science and agriculture must march hand in hand.

If it be a question of lack of manpower—and this factor will prove more vital as our war prisoners are returned to their own lands—can we not call upon the surplus workers of some other countries to help our labour position? Italy, for example, is said to have hundreds of thousands of workers additional to pre,ent requirements. Could they not be induced to • work in our fields? Many are, no doubt, already skilled in farming. To win the peace we may eventually have to apply almost the same methods as we did to win the war. If we cannot supply sufficient permanent houses or prefabs for agricultural workers, they must be accommodated in reasonably comfortable camps. A nation which could construct the Mulberry Harbours during the course of a great struggle is surely capable of tackling problems such as these. All that we require is inspired leadership instead of wrangling politicians, many concerned more with their pet ideologies than with the salvation of the country.

How Grim is My Valley

THE loss of the basic petrol ration is a far more bitter blow to residents in the big cities' dormitory areas than to those within the strictly bricks-and-motor boundaries who, in any case, normally make their journeys between home and business by public transport.

Those with a fondness for living within sight of the country are now penalized for their desire by increasingly long waits for buses. First of all, the leaping railway fares thrust an additional burden on to the middle-distance services of the already fully loaded road-transport system, and, before the regular passengers had time to acclimatize themselves to the influx, the loss of basic petrol forced still further crowds into the queues, although it could not force the increased passengers with any speed on to the buses themselves.

When Mr. L. G. Callaghan, Parliamentary Secretary to the Minister of Transport, declared in the House of Commons that there really was not sufficient evidence to show that the situation had deteriorated beyond its previous state, it can only be assumed that he had not made a close enough study of the subject for which he is so much responsible. Every operator concerned with the problem in question will hope, without a great deal of confidence, we fear, that there may be something in Mr. Callaghan's ideas on the matter of the staggering of hours. It may be opportune, however, to observe that the class most hit by the withdrawal of a basic petrol ration, namely, the professional and administrative worker, is more firmly bound to the recognized office hours than most other people engaged in business.

Mr. Callaghan, having assured the world at large that whilst public transport has not been adequate since the end of hostilities "that is something we are rapidly remedying," the spokesmen of the Ministry will have to do some hard thinking if they are to explain just what is the reason for the longer and increasingly impatient queues with which the various passenger-transport undertakings are now faced. There can be few instances in which operators are not using their available facilities to the best advantage, and it will be a good public relations officer who can satisfactorily explain to the man who has bought his little place in the country just what is this rapid remedy which is going to do the magiccarpet act in a manner that experienced transport executives have found beyond their powers.