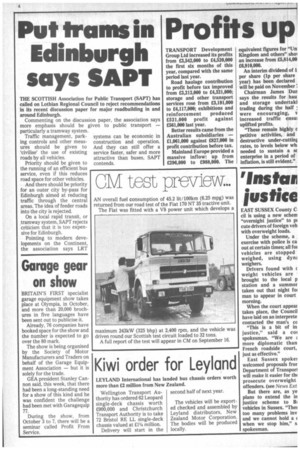 Page 6, 26th August 1977 — 'Ins taii
Close
Noticed an error?
If you've noticed an error in this article please click here to report it so we can fix it.

Under the scheme, a exercise with police is ca out at certain times; all foi vehicles are stopped weighed, using dyni. weighers.

Drivers found with c weight vehicles are brought to the local p station and a summor taken out that night fol man to appear in court morning.

When the court appear takes place, the Council have laid on an interprete contacted the man's co "This is a bit of in justice," said a col spokesman. "We are more diplomatic than French roadside court, just as effective."

East Sussex spokes welcomed proposals fror Department of Transport will make it easier for du prosecute overweight offenders. (see News Ext But there are, as ye plans to extend the in justice scheme to Bi vehicles in Sussex. "Thei too many problems inv and we cannot hold a when we stop him," s. spokesman.