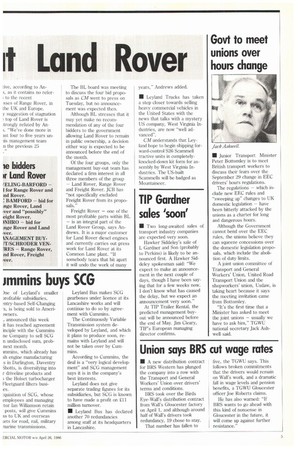 Page 5, 26th April 1986 — Govt to meet unions over hours change
Close
Noticed an error?
If you've noticed an error in this article please click here to report it so we can fix it.
Keywords : Labour Relations, Trade Unions, Union Of Shop, Distributive And Allied Workers, Industrial Workers Of The World, Labor

The regulations — which include new EEC rules and "sweeping up" changes to UK domestic legislation — have been bitterly attacked by the unions as a charter for long and dangerous hours.

Although the Government cannot bend over the EEC rules, the unions believe they can squeeze concessions over the domestic legislation proposals, which include the abolition of duty limits.

A joint union committee of Transport and General Workers' Union, United Road Transport Union and the shopworkers' union, Usdaw, is taking heart because it says the meeting invitation came from Bottoinley.

"It's the first time that a Minister has asked to meet the joint unions — usually we have to ask him," Tmkt national secretary Jack Ashwell said.