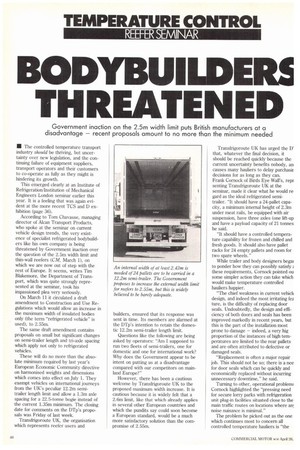 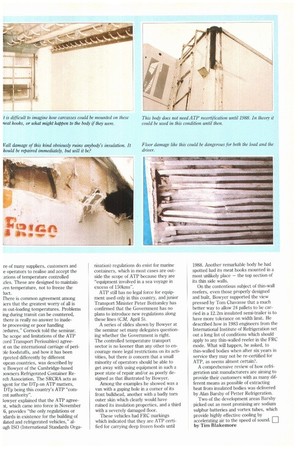 Government inaction on the 2.5m width limit puts British manufacturers at a disadvantage — recent proposals amount to no more than the minimum needed

• The controlled temperature transport industry should be thriving, but uncertainty over new legislation, and the continuing failure of equipment suppliers, transport operators and their customers to co-operate as fully as they might is hindering its growth.

This emerged clearly at an Institute of Refrigeration/Institution of Mechanical Engineers London seminar earlier this year. It is a feeling that was again evident at the more recent TCS and D exhibition (page 36).

According to Tom Chavasse, managing director of Alcan Transport Products, who spoke at the seminar on current vehicle design trends, the very existence of specialist refrigerated bodybuilders like his own company is being threatened by Government inaction over the question of the 2.5m width limit and thin-wall reefers (CM, March I), on which we are now out of step with the rest of Europe. It seems, writes Tim Blakemore, the Department of Transport, which was quite strongly represented at the seminar, took his impassioned plea very seriously.

On March 11 it circulated a draft amendment to Construction and Use Regulations which would allow an increase in the maximum width of insulated bodies only (the term "refrigerated vehicle" is used), to 2.55m.

The same draft amendment contains proposals on small but significant changes on semi-trailer length and tri-axle spacing which apply not only to refrigerated vehicles.

These will do no more than the absolute minimum required by last year's European Economic Community directive on harmonised weights and dimensions which comes into effect on July 1. They exempt vehicles on international journeys from the UK's peculiar 12.2m semitrailer length limit and allow a 1.3m axle spacing for a 22.5-tonne bogie instead of the current 1.35m minimum. The closing date for comments on the Dip's proposals was Friday of last week.

Transfrigoroute UK, the organisation which represents reefer users and builders, ensured that its response was sent in time. Its members are alarmed at the DTp's intention to retain the domestic 12.2m semi-trailer length limit.

Questions like the following are being asked by operators: "Am I supposed to run two fleets of semi-trailers, one for domestic and one for international work? Why does the Government appear to be intent on putting us at a disadvantage compared with our competitors on mainland Europe?"

However, there has been a cautious welcome by Transfrigoroute UK to the proposed maximum width increase. It is cautious because it is widely felt that a 2.6m limit, like that which already applies in several other European countries and which the pundits say could soon become a European standard, would be a much more satisfactory solution than the compromise of 2.55m. Transfrigoroute UK has urged the D' that, whatever the final decision, it should be reached quickly because the current uncertainty benefits nobody, an causes many hauliers to delay purchasir decisions for as long as they can. Frank Cornock of Birds Eye Wall's, repr senting Transfrigoroute UK at the seminar, made it clear what he would re gard as the ideal refrigerated semitrailer. "It should have a 24-pallet capacity, a minimum internal height of 2.3m under meat rails, be equipped with air suspension, have three axles (one lift-up and have a payload capacity of 21 tonnes he said.

"It should have a controlled temperature capability for frozen and chilled and fresh goods. It should also have pallet racks for 24 empty pallets and room for two spare wheels."

While trailer and body designers begat to ponder how they can possibly satisfy these requirements, Cornock pointed ou some simpler action they can take which would make temperature controlled hauliers happier.

"The chief weakness in current vehick design, and indeed the most irritating lea tare, is the difficulty of replacMg door seals. Undoubtedly, the design and efficiency of both doors and seals has been improved markedly in recent years, but this is the part of the installation most prone to damage — indeed, a very hig proportion of the instances of high temperatures are limited to the rear pallets and are often attributed to defective or damaged seals.

"Replacement is often a major repair job. This should not be so; there is a nee for door seals which can be quickly and economically replaced without incurring unnecessary downtime," he said.

Turning to other, operational problem Cornock highlighted the "pressing need for secure lorry parks with refrigeration unit plug-in facilities situated close to the main traffic routes on locations where an: noise nuisance is minimal."

re of many suppliers, customers and e operators to realise and accept the :ations of temperature controlled des. These are designed to maintain .ren temperature, not to freeze the iuct.

There is common agreement among iers that the greatest worry of all is m out-loading temperatures. Problems ing during transit can be countered, there is really no answer to inadete processing or poor handling cedures," Comock told the seminar. 'he scope and limitations of the ATP cord Transport Perissables) agreeit on the international carriage of penle foodstuffs, and how it has been rpreted differently by different opean countries, was described by 'e Bowyer of the Cambridge-based )owners Refrigerated Container Rerch Association. The SRCRA acts as igent for the Dip on ATP matters, Dip being this country's ATP "coment authority".

lowyer explained that the ATP agreeIt, which came into force in November '6, provides "the only regulations or -idards in existence for the building of ilated and refrigerated vehicles," alugh ISO (International Standards Orga nisation) regulations do exist for marine containers, which in most cases are outside the scope of ATP because they are "equipment involved in a sea voyage in excess of 150kms".

ATP still has no legal force for equipment used only in this country, and junior Transport Minister Peter Bottomley has confirmed that the Government has no plans to introduce new regulations along these lines (CM, April 5).

A series of slides shown by Bowyer at the seminar set many delegates questioning whether the Government is right. The controlled temperature transport sector is no keener than any other to encourage more legal restrictions on its activities, but there is concern that a small minority of operators should be able to get away with using equipment in such a poor state of repair and/or as poorly designed as that illustrated by Bowyer.

Among the examples he showed was a van with a gaping hole in a comer of its front bulkhead, another with a badly torn outer skin which clearly would have ruined its insulation properties, and a third with a severely damaged floor.

These vehicles had FRC markings which indicated that they are ATP certified for carrying deep frozen foods until 1988. Another remarkable body he had spotted had its meat hooks mounted in a most unlikely place — the top section of its thin side walls.

On the contentious subject of thin-wall reefers, even those properly designed and built, Bowyer supported the view pressed by Tom Chavasse that a much better way to allow 24 pallets to be carried in a 12.2m insulated semi-trailer is to have more tolerance on width limit. He described how in 1983 engineers from the International Institute of Refrigeration set out a long list of conditions which should apply to any thin-walled reefer in the FRC mode. What will happen, he asked, to thin-walled bodies when after six years in service they may not be re-certified for ATP, as seems almost certain?.

A comprehensive review of how refrigeration unit manufacturers are aiming to provide their customers with as many different means as possible of extracting heat from insulated bodies was delivered by Alan Barsby of Petter Refrigeration.

Two of the development areas Barsby picked out as most promising are sodium sulphur batteries and vortex tubes, which provide highly effective cooling by accelerating air to the speed of sound. 7 by Tim Blakemore