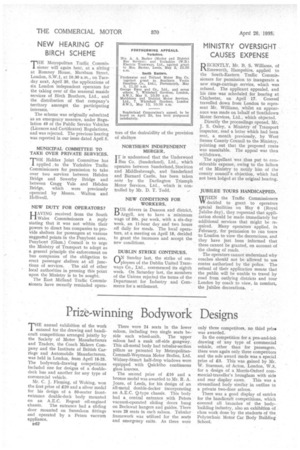 1. will again hear, at a sitting at Romney House, Marsham Street, London, S.W.1, at 10.30 a.m., on Tuesday next, April 30, the applications of six London independent operators for the taking over of the seasonal seaside services of Birch Brothers, Ltd., and the distribution of that company's territory amongst the participating interests.

The scheme was originally submitted as an emergency measure, under Regulation 49 of the Public Service Vehicles (Licences and Certificates) Regulations, and was rejected. The previous hearing was reported in our issue dated April 5.

THE Halifax Joint Committee has applied . to the Yorkshire Traffic Commissioners for permission to take over two services between Hebden Bridge and Sowerby Bridge and between Cragg Vale and Hebden Bridge, which were previously operated by Messrs. Walton and Helliwell.

IAVING received from the South 1 Wales Commissioners a reply stating that it was not within their powers to direct bus companies to provide shelters for passengers at various suggested points in the Penybont area, Penybont (Glam.) Council is to urge the Ministry of Transport to adopt as a general principle the enforcement on bus companies of the obligation to erect passenger shelters at all junc

tions of services. The aid of other local authorities in pressing this point upon the Ministry is to be sought. The East Midland Traffic Commissioners have recently reminded opera tors of the desirability of the provision of shelters NORTHERN INDEPENDENT MERGER.

I T is understood that the Underwood Bus Co. (Sunderland), Ltd., which operates between Sunderland, Stockton and Middlesbrough, and Sunderland and Barnard Castle, has been taken over by the Darlington Triumph Motor Services, Ltd., which is controlled by Mr. D. T. Todd.

BUS drivers in Dunoon and district, Argyll, are to have a minimum wage of 50s. per week, with a six-day week, an 11-hour day and two hours off daily for meals. The local operators, at a meeting on April 18, decided to grant the increases and accept the new conditions.

ON Sunday last, the strike of employees of the Dublin United Tramways Co., Ltd., commenced its eighth week. On Saturday last, the members of the Unions rejected the terms of the Department for Industry and Commerce for a settlement.

RECENTLY, Mr. B. S. Williams, of Emsworth, Hampshire, applied to the South-Eastern Traffic Commissioners for permission to inaugurate a new stage-carriage service, which was refused. The applicant appealed, and his case was scheduled for hearing at Chichester, on April 17. Counsel travelled down from London to represent Mr. Williams, whilst an appearance was made on behalf of Southdown Motor Services, Ltd., which objected. Directly the proceedings opened, Mr. J. S. Oxley, a Ministry of Transport inspector, read a letter which had been sent, a month previously, by West Sussex County Council to the Ministry, pointing out that the proposed route was unsuitable. The appeal was then withdrawn.

The appellant was thus put to considerable expense, owing to the failure of the Ministry to notify him of the county council's objection, which had not been lodged at the original hearing.

V-EN the Traffic Commissioners dcided to grant to operators special facilities on May 6 (Royal Jubilee day), they requested that application should be made immediately for additional services that might be required. Many operators applied, in February, for permission to run tours to London to view the decorations, and they have just been informed that these cannot be granted, on account of the closing of roads.

The operators cannot understand why coaches should not be allowed to use routes authorized by the police. The refusal of their application means that the public will be unable to travel by road from outlying districts and tour London by coach to view, in comfort, the Jubilee decorations.