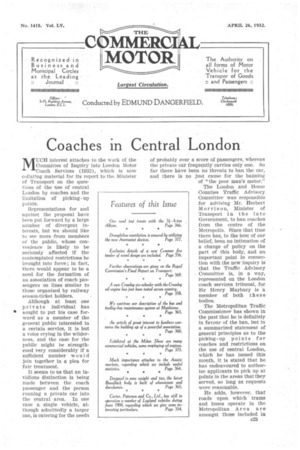 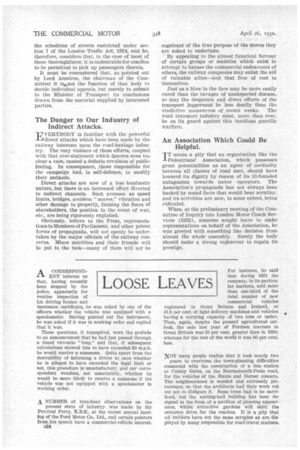 Page 45, 26th April 1932 — Coaches in Central London
Close
Noticed an error?
If you've noticed an error in this article please click here to report it so we can fix it.
Keywords : Baa Limited, Bus Transport In The United Kingdom

MUCH interest attaches to the work of the Committee of Inquiry into London Motor Coach Services (1932), which is now collating material for its report to the Minister of Transport on the ques tions of the use of central London by coaches and the limitation of picking-up points.

Representations for and against the proposal have been put forward by a large number of divergent interests, but we should like to see more from members of the public, whose convenience is likely to be seriously affected if the contemplated restrictions be brought into force ; in fact, there would appear to be a need for the formation of an association of coach passengers on lines similar to those organized by railway season-ticket holders.

Although at least one private individual has ▪ sought to put his case for ward as a member of the general public interested in a certain service, it is but a voice crying in the wilderness, and the case for the public might be strengthened very considerably if a sufficient number would join together in a plea for fair treatment.

It seems to us that an invidious distinction is being made between the coach passenger and the person running a private car into the central area. In one case a single vehicle, although admittedly a larger one, is catering for the needs of probably over a score of passengers, whereas the private ear frequently carries only one. So far there have been no threats to ban the car, and there is no just cause for the banning of "the poor man's motor." The London and Home Counties Traffic Advisory Committee was responsible for advising Mr. Herbert Morrison, Minister of Transport in the late Government, to ban coaches from the centre of the Metropolis. Since that time there has, to the best of our belief, been no intimation of a change of policy on the part of this body, and an important point in connection with the new inquiry is that the Traffic Advisory Committee is, in a way, represented on the London coach services tribunal, for Sir Henry Maybury is a member of both these bodies.

The Metropolitan Traffic Commissioner has shown in the past that he is definitely in favour of the ban, but in a summarized statement of general principles as to the picking-up points for coaches and restrictions on the use of central London, which he has issued this month, it is stated that he has endeavoured to authorize applicants to pick up at points in the areas that they. served, so long as requests were reasonable.

He adds, however, that roads upon which trams and buses operate in the Metropolitan Area are amongst those included in the schedules of streets restricted under section 7 of the London Traffic Act, 1924, and he, therefore, considers that, in the case of most of these thoroughfares; it is undesirable for coaches to be permitted to pick up passengers therein. It must be remembered that, as pointed out by Lord Arunlree, the chairman of the Committee; it iamnot the function of that body to decide individual appeals, but merely to submit to the Minister of Transport its conclusions drawn from the material supplied by interested parties.

The Danger to Our industry of Indirect Attacks.

TIVERYBODY is familiar with the powerful 4 I direct attacks which have been made by the railway interests upon the road-haulage industry. The very violence of these efforts, coupled with that over-statement which denotes none too clear a case, caused a definite revulsion of public feeling. In consequence, those responsible for the campaign had, in self-defence, to modify their methods.

Direct attacks are now of a less bombastic nature,, but there is an increased effort diverted to indirect channels. Such avenues as speed limits, bridges, accident "scares," vibration and other damage to property, fanning the fears of shareholders, the position in the event of war, etc., are being rigorously exploited. Obviously, letters to the Press, representations to Members of Parliament, and other potent forms of propaganda, will not openly be undertaken by the major officials of the railway concerns. Minor satellites and their friends will be put to the task—many of them will not be cognizant of the true purpose of the Moves they are asked to undertake.

By appealing to the almost fanatical fervour of certain groups or societies which exist to attempt to harass the commercial endeavours of others, the railway companies may enlist the aid of valuable allies—and that free of cost to themselves. Just as a blow in the face may be more easily cured than the ravages of unsuspected disease, so may the desperate and direct efforts of the transport juggernaut be less deadly than the vindictive manoeuvres of recent weeks. The road transport industry must, more than ever, be on its guard against this insidious guerilla warfare.

An Association Which Could Be Helpful. •

TT seems a pity that an organization like the -I-Pedestrians' Association, which possesses great potentialities as an agent of cordiality between all classes of road user, should have lowered Its dignity by reason of its ill-founded antagonism towards motor operators. The Association's propaganda has not always been backed by sound facts that would bear scrutiny, and its activities are now, to some extent, being ridiculed.

When, at the preliminary meeting of the Colnmittee of Inquiry into London Motor Coach Services (1932), someone sought leave to make representations on behalf of the Association, he was greeted with something like derision from almost the whole assembly. Surely the body should make a strong enfleavour to regain its prestige,