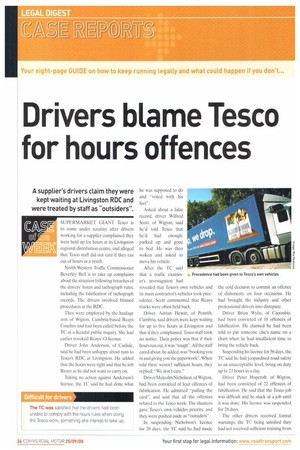 Page 26, 25th September 2008 — rivers blame Tesco for hours offences
Close
Noticed an error?
If you've noticed an error in this article please click here to report it so we can fix it.
Keywords : Transport, Land Transport, Traffic Law, Tesco, Tachograph

A supplier's drivers claim they were kept waiting at Livingston RDC and were treated by staff as "outsiders",

SUPERMARKET GIANT Tesco is to come under scrutiny after drivers working for a supplier complained they were held up for hours at its Livingston regional distribution centre, and alleged that Tesco staff did not care if they ran out of hours as a result.

North-Western Traffic Commissioner Beverley Bell is to take up complaints about the situation following breaches of the drivers hours and tachograph rules, including the falsification of tachograph records, The drivers involved blamed procedures at the RDC.

They were employed by the haulage arm of Wigton, Cumbria-based Reays Coaches and had been called before the TC at a Kendal public inquiry. She had earlier revoked Reays' 0-licence.

Driver John Anderson, of Carlisle, said he had been unhappy about runs to Tesco's RDC at Livingston. He added that the hours were tight and that he left Reays as he did not want to carry on.

Taking no action against Anderson's licence, the TC said he had done what he was supposed to do and "voted with his feet".

Asked about a false record, driver Wilfred Scott, of Wigton, said he'd told Tesco that he'd had enough, parked up and gone to bed. He was then woken and asked to move his vehicle, After the TC said that a traffic examiners investigation had revealed that Tesco's own vehicles and its main contractor's vehicles took precedence. Scott commented that Reays trucks were often held back.

Driver Adrian Hewitt, of Penrith, Cumbria, said drivers were kept waiting for up to five hours at Livingston and that if they complained, Tesco staff took no notice. Their policy was that if their hours ran out. it was "tough". All the staff cared about, he added, was "booking you in and giving you the paperwork". When told there weren't sufficient hours, they replied: "We don't care."

Driver Malcolm Nicholson, of Wigton, had been convicted of four offences of falsification. He admitted "pulling the card", and said that all the offences related to the Tesco work. The shunters gave Tesco's own vehicles priority, and they were pushed aside as "outsiders".

In suspending Nicholson's licence for 28 days. the TC said he had made

the cold decision to commit an offence of dishonesty on four occasions. He had brought the industry and other professional drivers into disrepute.

Driver Brian Wylie, of Canonbie, had been convicted of 18 offences of falsification. He claimed he had been told to put someone else's name on a chart when he had insufficient time to bring the vehicle back.

Suspending his licence for 56 days, the TC said he had jeopardised road safety to an unacceptable level, being on duty up to 23 hours in a day.

Driver Peter Hoperoft, of Wigton, had been convicted of 22 offences of falsification. He said that the Tesco job was difficult and he stuck at a job until it was done. His licence was suspended for 28 days.

The other drivers received formal warnings. the TC being satisfied they had not received sufficient training from