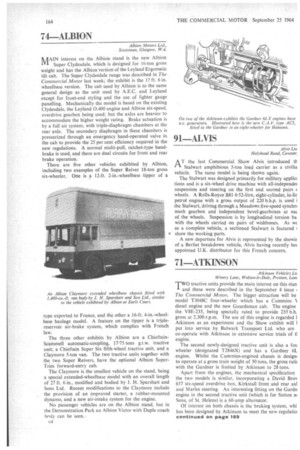 Page 168, 25th September 1964 — 74--ALBION
Close
Noticed an error?
If you've noticed an error in this article please click here to report it so we can fix it.

MAIN interest on the Albion stand is the new Albion Super Clydesdale, which is designed for 16-ton gross weight and has the Albion version of the Leyland Ergomatic tilt cab. The Super Clydesdale range was described in The Commercial Motor last week; the exhibit is the 17 ft. 6 in. wheelbase version. The cab used by Albion is to the same general design as the unit used by A.E.C. and Leyland except for front-end styling and the use of lighter gauge panelling. Mechanically the model is based on the existing Clydesdale, the Leyland 0.400 engine and Albion six-speed, overdrive gearbox being used: but the axles are heavier to accommodate the higher weight rating. Brake actuation is by a full air system, with triple-diaphragm chambers at the rear axle. The secondary diaphragm in these chambers is pressurized through an emergency hand-operated valve in the cab to provide the 25 per cent efficiency required in the new regulations. A normal multi-pull, ratchet-type handbrake is used, and there are dual circuits for front and rear brake operation.

There are five other vehicles exhibited by Albion, including two examples of the Super Reiver 18-ton gross six-wheeler. One is a 12-ft. 2-in.-wheelbase tipper of a

type exported to France, and the other a 16-ft. 4-in.-wheelbase haulage model, A feature on the tipper is a triplereservoir air-brake system, which complies with French law.

The three other exhibits by Albion are a ChieftainScamrnell automatic-coupling, 17.75 tons g.t.w. tractive unit; a Chieftain Super Six fifth-wheel tractive unit, and a Claymore 5-ton van. The two tractive units together with the two Super Reivers, have the optional Albion SuperTrim forward-entry cab.

The Claymore is the smallest vehicle on the stand, being a special extended-wheelbase model with an overall length of 27 ft. 6 in., modified and bodied by J. H. Sparshatt and Sons Ltd. Recent modifications to the Claymore include the provision of an improved starter, a rubber-mounted dynamo, and a new air-intake system for the engine.

No passenger vehicles are on the Albion stand, but in the Demonstration Park an Albion Victor with Duple coach body can be seen.