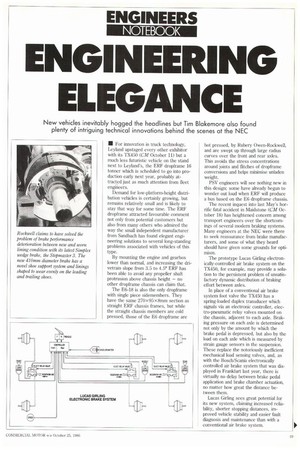 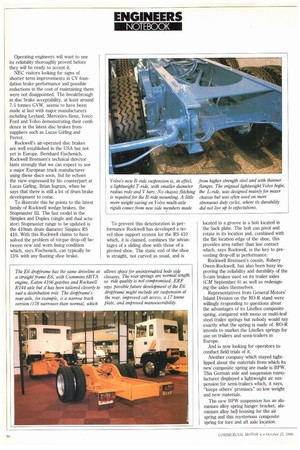 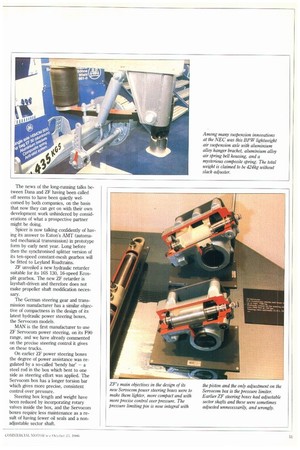 11 For innovation in truck technology, Leyland upstaged every other exhibitor with its TX450 (CM October 11) but a much less futuristic vehicle on the stand next to Leyland's, the ERF dropframe 16 tonner which is scheduled to go into production early next year, probably attracted just as much attention from fleet engineers.

Demand for low-platform-height distribution vehicles is certainly growing, but remains relatively small and is likely to stay that way for some time. The ERF dropframe attracted favourable comment not only from potential customers but also from many others who admired the way the small independent manufacturer from Sandbach has found elegant engineering solutions to several long-standing problems associated with vehicles of this type.

By mounting the engine and gearbox lower than normal, and increasing the drivetrain slope from 3.5 to 4.50 ERF has been able to avoid any propeller shaft protrusion above chassis height — no other dropframe chassis can claim that.

The E6-18 is also the only dropframe with single piece sidemembers. They have the same 270x95 x 8mm section as straight ERF chassis frames, but while the straight chassis members are cold pressed, those of the E6 dropframe are hot pressed, by Rubery Owen-Rockwell, and are swept up through large radius curves over the front and rear axles. This avoids the stress concentrations around joints and flitches of dropframe conversions and helps minimise unladen weight.

PSV engineers will see nothing new in this design; some have already begun to wonder out loud when ERF will produce a bus based on the E6 dropframe chassis.

The recent inquest into last May's horrific fatal accident in Maidstone (CM October 18) has heightened concern among transport engineers over the shortcomings of several modern braking systems. Many engineers at the NEC were there to seek reassurance from brake manufacturers, and some of what they heard should have given some grounds for optimism.

The prototype Lucas Girling electronically-controlled air brake system on the TX450, for example, may provide a solution to the persistent problem of unsatisfactory dynamic distribution of braking effort between axles.

In place of a conventional air brake system foot valve the TX450 has a spring-loaded duplex transducer which signals via an electronic controller, electro-pneumatic relay valves mounted on the chassis, adjacent to each axle. Braking pressure on each axle is determined not only by the amount by which the brake pedal is depressed, but also by the load on each axle which is measured by strain gauge sensors in the suspension. These replace the notoriously inefficient mechanical load sensing valves, and, as with the Bosch/Scania electronically controlled air brake system that was displayed in Frankfurt last year, there is virtually no delay between brake pedal application and brake chamber actuation, no matter how great the distance between them.

Lucas Girling sees great potential for its new system, claiming increased reliability, shorter stopping distances, improved vehicle stability and easier fault diagnosis and maintenance than with a conventional air brake system. Operating engineers will want to see its reliability thoroughly proved before they will be ready to accept it.

NEC visitors looking for signs of shorter term improvements in CV foundation brake performance and possible reductions in the cost of maintaining them were not disappointed. The breakthrough in disc brake acceptability, at least around 7.5 tonnes GVW, seems to have been made at last with major manufacturers including Leyland, Mercedes-Benz, Iveco Ford and Volvo demonstrating their confidence in the latest disc brakes from suppliers such as Lucas Girling and Perrot.

Rockwell's air-operated disc brakes are well established in the USA but not yet in Europe. Bernhard Fischenich, Rockwell Bremsen's technical director hints strongly that we can expect to see a major European truck manufacturer using these discs soon, but he echoes the view expressed by his counterpart at Lucas Girling, Brian Ingram, when he says that there is still a lot of drum brake development to come.

To illustrate this he points to the latest family of Rockwell wedge brakes, the Stopmaster III. The last model in the Simplex and Duplex (single and dual actuator) Stopmaster range to be updated is the 410mm drum diameter Simplex RS 410. With this Rockwell claims to have solved the problem of torque drop-off between new and worn lining condition which, says Fischenich, can typically be 15% with any floating shoe brake. To prevent this deterioration in performance Rockwell has developed a novel shoe support system for the RS 410 which, it is claimed, combines the advantages of a sliding shoe with those of a pivoted shoe. The static end of the shoe is straight, not curved as usual, and is located in a groove in a bolt located in the back plate. The bolt can pivot and rotate in its location and, combined with the flat location edge of the shoe, this provides area rather than line contact which, says Rockwell, is the key to preventing drop-off in performance.

Rockwell Bremsen's cousin, Rubery Owen-Rockwell, has also been busy improving the reliability and durability of the S-cam brakes used on its trailer axles (CM September 6) as well as redesigning the axles themselves.

Representatives from General Motors' Inland Division on the RO-R stand were willingly responding to questions about the advantages of its Liteflex composite spring, compared with mono or multi-leaf steel trailer springs but nobody would say exactly what the spring is made of. RO-R intends to market the Liteflex springs for use on trailers and semi-trailers in Europe.

And is now looking for operators to conduct field trials of it.

Another company which stayed tightlipped about the materials from which its new composite spring are made is BPW. This German axle and suspension manufacturer displayed a lightweight air suspension for semi-trailers which, it says, 'keeps others' promises" on low weight and new materials.

The new BPW suspension has an aluminium alloy spring hanger bracket, aluminium alloy bell housing for the air spring and this mysterious composite spring for fore and aft axle location. The news of the long-running talks between Dana and ZF having been called off seems to have been quietly welcomed by both companies, on the basis that now they can get on with their own development work unhindered by considerations of what a prospective partner might be doing.

Spicer is now talking confidently of having its answer to Eaton's AMT (automated mechanical transmission) in prototype form by early next year. Long before then the synchronised splitter version of its ten-speed constant-mesh gearbox will be fitted to Leyland Roadtrains.

The German steering gear and transmission manufacturer has a similar objective of compactness in the design of its latest hydraulic power steering boxes, the Servocom models.

MAN is the first manufacturer to use ZF Servocom power steering, on its F90 range, and we have already commented on the precise steering control it gives on these trucks.

On earlier ZF power steering boxes the degree of power assistance was regulated by a so-called 'bendy bar' — a steel rod in the box which bent to one side as steering effort was applied. The Servocom box has a longer torsion bar which gives more precise, consistent control over pressure.

Steering box length and weight have been reduced by incorporating rotary valves inside the box, and the Servocom boxes require less maintenance as a result of having fewer oil seals and a nonadjustable sector shaft.