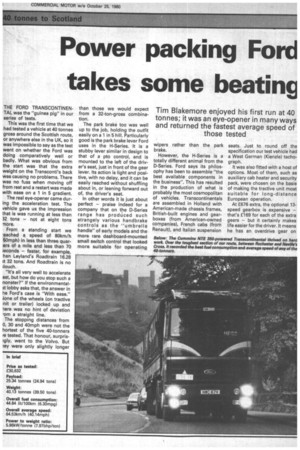 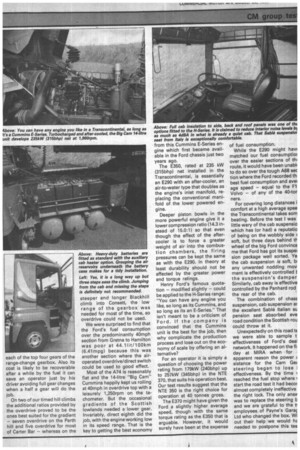 Tim Blakemore enjoyed his first run at 40 tonnes; it was an eye-opener in many ways and returned the fastest average speed of those tested

THE FORD TRANSCONTINENTAL was the "guinea pig" in our series of tests.

This was the first time that we had tested a vehicle at 40 tonnes gross around the Scottish route, or anywhere else in the UK, so it was impossible to say as the test went on whether the Ford was doing comparatively well or badly. What was obvious from the start was that the extra weight on the Transconti's back was causing no problems. There was no fuss when moving off from rest and a restart was made with ease on a 1 in 5 gradient.

The real eye-opener came during the acceleration test. The vehicle gave us the impression that is was running at less than 32 tons — not at eight tons -no re.

From a standing start we -eached a speed of 80km/h 50mph) in less than three guarers of a mile and less than 70 ;econds — faster, for example, han Leyland's Roadtrain 16.28 it 32 tons. And Roadtrain is no douch.

"It's all very well to accelerate ast, but how do you stop such a nonster?" If the environmentalst lobby asks that, the answer in he Ford's case is "With ease." 'one of the wheels (on tractive Init or trailer) locked up and iere was no hint of deviation -om a straight line.

The stopping distances from 0, 30 and 40mph were not the hortest of the five 40-tonners re tested. That honour, surprisigly, went to the Volvo. But ley were only slightly longer than those we would expect from a 32-ton-gross combination.

The park brake too was well up to the job, holding the outfit easily on a 1 in 5 hill. Particularly good is the park brake lever Ford uses in the H-Series. It is a stubby lever similar in design to that of a pto control, and is mounted to the left of the driver's seat, just in front of the gear lever. Its action is light and positive, with no delay, and it can be easily reached without shuffling about in, or leaning forward out of, the driver's seat.

In other words it is just about perfect — praise indeed for a company that on the D-Series range has produced such strangely various handbrake controls as the "umbrella handle" of early models and the more rare dashboard-mounted small switch control that looked more suitable for operating wipers rather than the park brake.

However, the H-Series is a totally different animal from the D-Series. Ford says its philosophy has been to assemble "the best available components in the business". This has resulted in the production of what is probably the most cosmopolitan of vehicles. Transcontinentals are assembled in Holland with American-made chassis frames, British-built engines and gearboxes (from American-owned companies), French cabs (from Renault), and Italian suspension seats. Just to round off the specification our test vehicle had a West German (Kienzle) tachograph.

It was also fitted with a host of options. Most of them, such as auxiliary cab heater and security pack, were chosen on the basis of making the tractive unit most suitable for long-distance European operation.

At £676 extra, the optional 13speed gearbox is expensive — that's £169 for each of the extra gears — but it certainly makes life easier for the driver. It means he has an overdrive gear on each of the top four gears of the range-change gearbox. Also its cost is likely to be recoverable after a while by the fuel it can save an operator just by his driver avoiding full gear changes when a half a gear will do the job.

On two of our timed hill climbs the additional ratios provided by the overdrive proved to be the ones best suited for the gradient — seven overdrive on the Perth hill and five overdrive for most of Carter Bar — whereas on the Above: Heavy-duty batteries are fitted as standard with the auxiliary cab heater option. Grouping the air reservoirs underneath the battery case makes for a tidy installation.

Left: Yes, it is a long way up but three steps ease the climb. Jumping from the cab and missing the steps is definitely not recommended.

steeper and longer Blackhill climb into Consett, the low range of the gearbox was needed for most of the time, so overdrive could not be used.

We were surprised to find that the Ford's fuel consumption over the predominantly 40mph section from Gretna to Hamilton was poor at 44,1 lit/100km (6.41mpg) because this was another section where the airoperated overdrive/direct switch could be used to good effect.

Most of the A74 is reasonably flat and the 14-litre "Big Cam" Cummins happily kept us rolling at 40mph in overdrive top with a leisurely 1,250rpm on the tachometer. But the occasional gradients of the Scottish lowlands needed a lower gear. Invariably, direct eighth did the job, with the engine working low in its speed range. That is the key to getting the best economy from this Cummins E-Series en gine which first became available in the Ford chassis just two years ago.

The E350, rated at 235 kW (315bhp) net installed in the Transcontinental, is essentially an E290 with an after-cooler, an air-to-water type that doubles as the engine's inlet manifold, replacing the conventional manifold of the lower powered engine.

Deeper piston bowls in the more powerful engine give it a lower compression ratio (14.3 instead of 15.0:1) so that even though the effect of the aftercooler is to force a greater weight of air into the combustion chambers, the firing pressures can be kept the same as with the E290. In theory at least durability should not be affected by the greater power and torque ratings.

Henry Ford's famous quotation — modified slightly — could be applied to the H-Series range: "You can have any engine you like, so long as its Cummins, and so long as its an E-Series." That isn't meant to be a criticism of Ford. If the company is convinced that the Cummins unit is the best for the job, then why complicate the production process and lose out on the economy of scale by offering an alternative?

For an operator it is simply a question of choosing the power rating from 179kW (240bhp) up to 257kW (345bhp) in the NTE 370, that suits his operation best. Our test results suggest that the NTE 350 is the right choice for operation at 40 tonnes gross.

The E370 might have given the Ford a slightly higher average speed, though with the same torque rating as the E350 that is arguable. However, it would surely have been at the expense of fuel consumption.

While the E290 might havt matched our fuel consumptior over the easier sections of thi route, it would have been unabli to do so over the tough A68 sec tion where the Ford recorded th best fuel consumption and avet age speed — equal to the Fl Volvo — of any of the 40-tor ners.

For covering long distances i comfort at a high average spee the Transcontinental takes som beating. Before the test I was little wary of the cab suspensio which has (or had) a reputatio of being on the wobbly side c soft, but three days behind th wheel of the big Ford convince me that Ford has got its suspei sion package well sorted. Ye the cab suspension is soft, ly any unwanted nodding mov ment is effectively controlled k the suspension's damper Similarly, cab sway is effective controlled by the Panhard rod the rear of the cab.

Unexpectedly on this road te we were able to sample t effectiveness of Ford's deal network. It happened on the -hi day at MIRA when for apparent reason the power E sistance for the Cam GeE steering began to lose effectiveness. By the time reached the fuel stop where start the road test it had becor almost completely ineffective the right lock. The only ansv was to replace the steering b and we are grateful to the b employees of Payne's GaraE Ltd who changed the box. WI out their help we would hE needed to postpone this tes