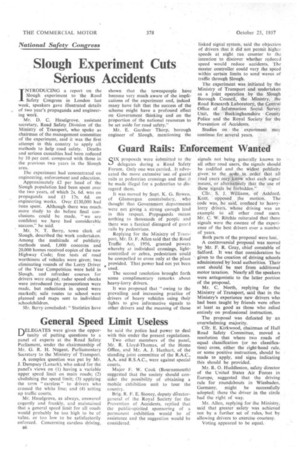 SIK proposals were submitted to the delegates during a Road Safety Forum. Only one was carried. It advocated the more extensive use of guard rails at pedestrian crossings and that. it be made illegal for a pedestrian to disregard them.

It was moved by Supt. K. G. Bowen, of Glamorgan constabulary, . who thought that Government departments were not giving a strong enough lead in this respect. Propaganda meant nothing to thousands of people and there was a farcical disregard of guard rails by pedestrians.

Replying for the Ministry of Transport, Mr. D. F. Allen said that the Road Traffic Act, 1956, granted powers whereby at individual crossings, lightcontrolled or zebra, pedestrians could be compelled to cross only at the place provided. That power had not yet been used.

The second resolution brought forth some complimentary remarks about heavy-lorry drivers.

signals not being generally known to all other road users, the signals should be codified and the widest publicity given: to the Bsok,in order that all road users maY;ktfOw-what each signal means, or alternatikely that the use of these signals be forbidden."

Cllr. S. J. Williams, of Ashford, Kent, opposed the motion. The code was, he said, confined to heavylorry drivers, whose driving was an example to all other road users. Mr. C. W. Ritchie reiterated that these signals were the essence of the experience of the best drivers over a number of years.

Both parts of the proposal were lost.

A controversial proposal was moved by Mr. F. R. Gray, chief constable of Salford. It was that consideration be given to the creation of driving schools administered by local authorities. Their cost should be met from additional motor taxation. Nearly all the speakers were antagonistic to the latter portion of the proposal.

Mr. C. North, replying for the Ministry of Transport, said that in the Ministry's experience new drivers who had been taught by friends were often at least as good as those who relied entirely on professional instruction.

The proposal was defeated by an overwhelming majority.

Cllr. E. Kirkwood, chairman of Hull Road Safety Committee, moved a resolution that where two roads of equal classification (or no classification) cross, either the right-hand rule, or some positive instruction, should be made to apply, and signs indicating this should be provided.

Mr. R. 0. Huddleston, safety director of the United States Air Forces in Europe, suggested that the driving rule for roundabouts in Wiesbaden, Germany, might be successfully adopted; there the driver in the circle had the right of way.

Mr. Allen, replying for the Ministry, said that greater safety was achieved not by a further set of rules, but by allowing drivers to exercise courtesy.

Voting appeared to be equal.