• The Transport Tribunal has ruled that Traffic Commissioners must 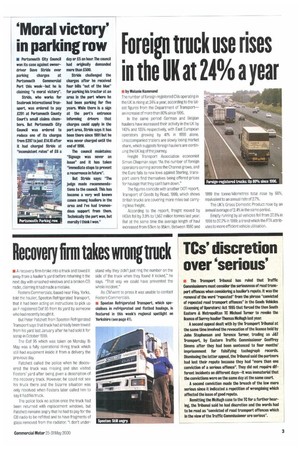 Page 5, 25th May 2000 — • The Transport Tribunal has ruled that Traffic Commissioners must
Close
Noticed an error?
If you've noticed an error in this article please click here to report it so we can fix it.
Keywords : Haulage, Law / Crime

consider the seriousness of road transport offences when considering a haulier's repute. It was the removal of the word "repeated" from the phrase "convicted of repeated road transport offences" in the Goods Vehicles (Licensing of Operators) Act 1995 that forced the then South Eastern & Metropolitan TC Michael Turner to revoke the licence of Surrey haulier Thomas McHugh last year.

A second appeal dealt with by the Transport Tribunal at the same time involved the revocation of the licence held by John Stephenson and Terence Turner, trading as J&T Transport, by Eastern Traffic Commissioner Geoffrey Simms after they had been sentenced to four months' imprisonment for falsifying tachograph records. Dismissing the latter appeal, the Tribunal said the partners had lost their repute because they had "more than one conviction of a serious offence". They did not require different incidents on different days—it was immaterial that the convictions were on the same day at the same court.

A second conviction made the breach of the law more serious since it indicated a repetition of wrongdoing which affected the issue of good repute.

Remitting the McHugh case to the IC for a further hearing, the Tribunal said he had discretion and the words had to be read as "convicted of road transport offences which in the view of the Traffic Commissioner are serious".