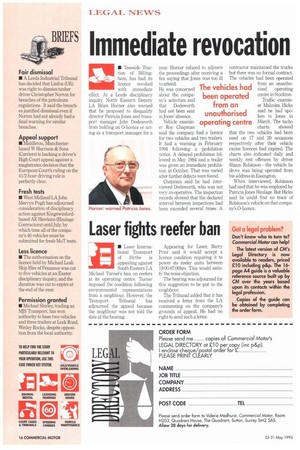 Page 18, 25th May 1995 — Laser fights reefer ban
Close
Noticed an error?
If you've noticed an error in this article please click here to report it so we can fix it.
Keywords : Refrigerated Container, Refrigerator Car, Appeal, Law / Crime, Environment

• Laser International Transport of Hythe is appealing against South Eastern LA Michael Turner's ban on reefers at its operating centre. Turner imposed the condition following environmental representations from a neighbour. However, the Transport Tribunal has adjourned the appeal because the neighbour was not told the date of the hearing. Appearing for Laser, Barry Prior said it would accept a licence condition requiring it to power its reefer units between 19:00-07:00hrs. This would satisfy the noise objection.

The hearing was adjourned for this suggestion to be put to the neighbour.

The Tribunal added that it has received a letter from the LA commenting on the company's grounds of appeal. He had no right to send such a letter.