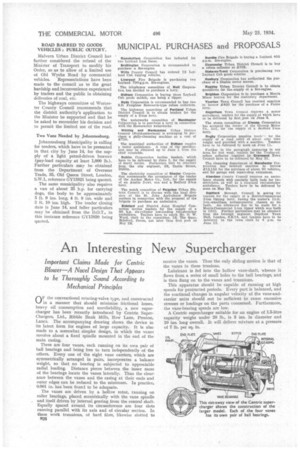 Malvern Urban District Council has further considered the refusal of the Minister of Transport to modify his Order, so as to allow of a limited use of Old. Wyche Road by commercial vehicles. Representations have been made to the council as to the great hardship and inconvenience experienced by traders and the public in obtaining deliveries of coal, etc.

The highways committee of Worcester County Council recommends that the district authority's application to the Minister be supported and that he be asked to reconsider his decision and to permit the limited use of the road.

Johannesburg Municipality is calling for tenders, which have to be presented in that city by June 14, for the supply of a light petrol-driven boxvan (pay-load capacity at least 1,000 lb.). Further particulars may be obtained from the Department of Overseas Trade, 35, Old Queen Street, London, S.W.1, reference GY13821 being quoted.

The same municipality also requires a van of about 25 h.p. for carrying dogs, the body to be approximately 5 ft. 9 ins. long, 4 ft. 9 ins, wide and 3 ft. 10 ins. high. The tender closing date is June 14, and fuller particulars may be obtained from the DOT., in this instance reference C-Y13820 being quoted.

Bridlington Corporation is recommended to purchase a fire-engine.

Ti10 telephones committee of Hull Corporation has decided to purchase a• lorry,

[Wham Corporation is buying three Leyland Cub goods models, one being a tipper.

The highways committee of Portland Urban District Council is to obtain tenders for the supply of a 2-ton lorry.

The waterworks committee of Manchester Corporation is to purchase Si lorry in connection with the Haweswater waterworks.

Whitley and monkseaton Urban District Conned (Northumberland) is arranging tIS purchase a gully-cleausing machine at a cost of £750.

The municipal authorities of Oldham require a motor ambulance. A copy of the specification may be obtained up to June 1 From the chief constable.

Dublin Corporation invites tenders, which have to be delivered by June 1, for the supply of heavy lorries. Particulars may be obtained from the city engineer, 28, Castle Street, Dublin.

The electricity committee of Chester Corporation recommends the acceptance of the tender of the Anchor Motor Co., Ltd., for the supply of an Austin 5-cwt. yen and a Bedford 2-ton lorry, The watch committee of Paignton Urban District Council Is to discuss with the local division of the Si. John Ambulance Brigade matters in connection with the proposal of the brigade to purchase an ambulance, Ridelord and District Joint Hospital Committee invites tenders for tho supply of a 20 h.P.. six-cylinder low-loading two-stretcher ambulance. Tenders have to reach Mr. 0. W. Ward, clerk to the committee, 18. The Quay, Bideford, Devon, not later than first post on May 28,

Cirencester Urban District Council is to buy a refuse collector at 4398.

H ugeley Urban District Council is to obtain quotations for the supply ot a fire-engine.

Brighton Corporation is to purchase a Morris Minor beacon for the stationery department.

Tiverton Town Council has received sanction to borrow g.450 for the purchase of a Faders lorry.

Dagenham Town Council requires a motor ambulance, tenders for the supply of which have to be delivered by flirt post on Juno 4.

The stores committee of Glossop Corporation has accepted the tender of the Glossop Motor Co., Ltd., for tee supply of a Bedford. 2-ton lorry.

Rugby Corporation requires tende., for the supply of a road roller of abont nine tons weight and provided with a scarifier. Tenders have to be delivered by noon on June 11, Further to the paragraph appearing in our issue for last week, tenders for the 7-cubic-yd. refuse collector required by Gravesend Town Council have to be delivered by May 51.

The cleansing department of Manchester Corpmation has received sanction to borrow £12,166 for the purchase of about 20 vehicles, end for garage and repair-shop extensions.

Aberdeen County Council requires an ambulance chassis with specially !milt body for tw,. stretchers, as well as a standard two-stretcher ambulance. Tenders have to be delivered by noon on May 29.

Deptford Borough Council is asking ior tenders for the supply ot a Morris-Commercial 2-ton tipping lorry, baying the maker's 11-16. 2-in.-wheelbase normal-control chassis SS itS basis. An allowarico has to be made for a Morris-Commercial 1-ton tipper which was built in 1925. Further particulars may be obtained from the borough engineer, Deptlord Town Hall, London, 8.E.14, and tenders have to be delivered to the town clerk by 4 p.m. on June 15.