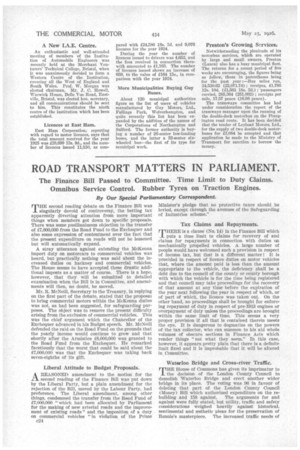 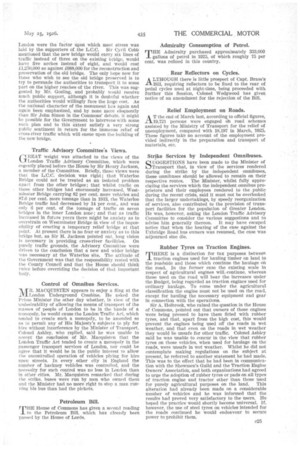 Page 8, 25th May 1926 — ROAD TRANSPORT MATTERS IN PARLIAMENT.
Close
Noticed an error?
If you've noticed an error in this article please click here to report it so we can fix it.
Keywords : Agricultural Machinery, Road Transport, Traction Engine, Tractors, Vehicles, Salter Report

rT1HE second reading debate on the Finance Bill was .1 singularly devoid of controversy, the betting tax apparently diverting attention from more important things when members got down to Specific proposals. There was some pusillanimous objection to the transfer of £7,000,000 from the Road Fund to the Exchequer and also some expression of contentment over the fact that the present expenditure on roads will not be lessened but will automatically expand.

A stray utterance against extending the McKenna import duty on motorcars to commercial vehicles was heard, but practically nothing was said about the increased duties on hackney and commercial vehicles. The House seems to have accepted these drastic additional imposts as a matter of course. There is a hope, however, that they will be submitted to detailed examination when the Bill is in Committee, and amend-ments will then, no doubt, be moved.

Mr. R. McNeill, Secretary to the Treasury, in replying on the first part of the debate, stated that the proposal to bring commercial motors within the McKenna duties was not, as had been suggested, for safeguarding purposes. The object was to remove the present difficulty arising from the exclusion of commercial vehicles. This was the chief argument which the Chancellor of the Exchequer advanced in his Budget speech. Mr. McNeill defended the raid on the Road Fund on the grounds that the yearly income would continue to grow and that shortly after the Armistice £8,000,000 was granted to the Road Fund from the Exchequer. He remarked facetiously that the worst that could be said about the £7,000.000 was that the Exchequer was taking back seven-eighths of its gift.

AREASONED amendment to the motion for the second reading of the Finance Bill was put down by the Liberal Party, but a plain amendment for the rejection of the Bill, moved by the Labour Party, had preference. The Liberal amendment, among other things, condemned the transfer from the Road Fund of 17,000,000 "which had been allocated by Parliament for the making of new arterial roads and the improvement of existing roads" and the imposition of a duty on commercial vehicles "in violation of the Prime

c24 Minister's pledge that no protective taxes should be levied, except through the avenues of the Safeguarding of Industries scheme."

THERE is a clause (No. 14) in the Finance Bill which puts a time limit to claims for recovery of and claims for repayments in connection with duties on mechanically propelled vehicles. A large number of people would have welcomed such a provision in respect of income tax, but that is a different matter L It is provided in respect of licence duties on motor vehicles that, where the amount paid is less than the amount appropriate to the vehicle, the deficiency shall be a debt due to the council of the county or county borough with which the vehicle is for the time being registered and that council may take proceedings for the recovery of that amount at any time before the expiration of the year next following the year in respect of which, or of part of which, the licence was taken out. On the other hand, no proceedings shall be brought for enforcing repayment of duty in respect of pre-1913 engines or overpayment of duty unless the proceedings are brought within the same limit of time. This seems a very proper provision if all that is contained therein meets the eye. It is dangerous to dogmatize on the powers of the tax collector, who can summon to his aid whole volumes of obscure sections in Finance Acts which render things "not what they seem." In this case, however, it appears pretty plain that there is a definite limit fixed and it is improbable that it will be altered in Committee.

HE House of Commons has given its imprimatur to

the decision of the London County Council to demolish Waterloo Bridge and erect another wider bridge in its place. The voting was 96 in favour of deleting that part of the London County Council. (Money) Bill which authorized expenditure on the rebuilding and 158 against. The arguments for and against were fully stated, but utility, traffic and safety considerations weighed heavily against historical, sentimental and testhetic pleas for the preservation of Rennie's masterpiece. The increased_traffic needs of London were the factor upon which most stress was laid by the supporters of the L.C.C. Sir Cyril Cobb mentioned that the new bridge wotdd carry six lines of traffic instead of three on the existing bridge, would have five arches instead of eight, and would cost 11,250,000 as against £988,000 for the reconstruction and preservation of the old.bridge. The only hope now for those who wish to see the old bridge preserved is to try to persuade the authorities to transport it to some part on the higher reaches of the river. This was suggested, by Mr. Gosling, and probably would receive much public support, although it is doubtful whether the authorities would willingly face the huge cost. As the national character of the monument has again and again been emphasized, and by none more eloquently than Sir John Simon in the Commons' debate, it might be possible for the Government to intervene with some such plan and to this extent satisfy a very strong Public sentiment in return for the immense relief of cross-river traffic which will ensue upon the building of the new bridge.

GREAT weight was attached to the views of the London Traffic Advisory Committee, which were cogently placed before the Houk by Sir Henry Jackson, a member of the Committee. Briefly, those views were that the -L.C.C.' decision was right; that Waterloo Bridge. could not be treated as an isolated problem apart from the other bridges; that whilst traffic on those other bridges had enormously increased, Westminster Bridge carrying 82 per cent. more vehicles and 87.6 per cent, more tonnage than in 1913, the Waterloo Bridge traffic had decreased by 14 per cent., and was only 6 per cent, of the tonnage of traffic on seven bridges in the inner London zone; and that as traffic increased in future years there might be anxiety as to overstrain on Westminster Bridge in view of the impossibility of erecting a temporary relief bridge at that point. At present there is no fear or anxiety as to this bridge but, as Sir H. Jackson pointed out, long vision is necessary in providing cross-river facilities. On purely traffic grounds, the Advisory Committee were driven to the conclusion that a new and wider bridge was necessary at the Waterloo site. The attitude of the Government was that the responsibility rested with the County Council and that the House should think twice before overriding the decision of that important body.

IVr R. MACQUISTEN appears to enjoy a fling at the I_London Underground Combine, He asked the Prime Minister the other day whether, in view of the undesirability of allowing the means of transport of the masses of people of London to be in the hands of a monopoly, he would cause the London Traffic Act, which tended to create such a monopoly, to be amended so as to permit any of His Majesty's subjects to ply for hire without interference by the Minister of Transport. Colonel Ashley, who replied, said he was unable to accept the conclusion of Mr. Macquisten that the London Traffic Act tended to create a monopoly in the passenger transport services of London, nor could he agree that it would be in the public interest to allow the uncontrolled operation of vehicles plying for hire upon streets. In every other city in England the number of hackney vehicles was controlled, and the necessity for such control was no less in London than in other cities. Mr. Macquisten remarked that during the strike, buses were run by men who owned them and the Minister had no more right to stop a man running his bus than had the pickets.

THE House of Commons has given a second reading to the Petroleum Bill, which has already been passed by the House of Lords.

THE Admiralty purchased approximately 333,000 gallons of petrol in 1925, of which roughly 75 per cent. was refined in this country.

A LTHOUGH there is little prospect of Capt. Brass's tt Bill, requiring reflectors to be fixed to the rear of pedal cycles used at night-time, being proceeded with further this Session, Colonel Wedgwood has given notice of an amendment for the rejection of the Bill.

AT the end of March last, according to official figures, 19,721 persons were engaged cih road schemes assisted by the Ministry of Transport for the relief of unemployment, compared with 18,197 in March, 1925, These figures Mire no account of the employment provided indirectly in the preparation and transport of materials, etc.

SUGGESTIONS have been made to the Minister of Transport that, in view of the services rendered during the strike by the independent omnibuses, these omnibuses should be allowed to remain on their respective routes, The Minister, whilst fully appreciating the services which the independent omnibus proprietors and their employees rendered to the ,public during the recent crisis, said it must not be overlooked that the larger undertakings, by speedy reorganization of services, also contributed to the provision of transport facilities for the population of Greater London. He was, however, asking the London Traffic Advisory Committee to consider the various suggestions and to advise him generally thereon. It may have escaped notice that when the hearing of the case against the Uxbridge Road bus owners was resumed, the case was adjourned sine die.

THERE is a distinction for tax purposes between traction engines used for hauling timber on land to the roadside and those which continue the haulage on the road. In the former case the existing scale in respect of agricultural engines will continue, whereas those used on the road will bear the increases under the Budget, being regarded as traction engines used for ordinary haulage. To come under the agricultural classification the engine must not be used on the road, except for hauling the necessary equipment and gear in connection with the operations. Sir A. Holbrook, who raised the question in the House of Commons, pointed out that owners of those engines were being pressed to have them fitted with rubber tyres, and that, apart from the high cost, this would prevent the engines being used off the roads in wet weather, and that even on the roads in wet weather they would lie unsafe for other traffic. Colonel Ashley said he was unable to concur in the view that rubber tyres on those vehicles, when used for haulage on the roads, were unsafe in wet weather. Whilst he did not contemplate making regulations on the subject at present, he referred to another statement he had made. This was to the effect that he had been in communication with the Showmen's Guild and the Traction Engine Owners' Associaticin, and both organizations had agreed to urge the adoption of rubber tyres or pads on all types of traction engine and tractor other than those used for purely agricultural purposes on the land. This alteration had already been made on a considerable number of vehicles and he was informed that the results had proved very satisfactory to the users. He hoped the practice would shortly become universal. If, however, the use of steel tyres on vehicles intended for the roads continued he would endeavour to secure power to prohibitthem.