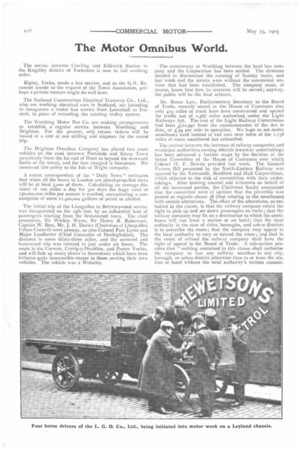 Page 6, 25th May 1905 — The Motor Omnibus World.
Close
Noticed an error?
If you've noticed an error in this article please click here to report it so we can fix it.
Keywords : Worthing, Buses In London, Portslade, Tram, Transport In Brighton And Hove, Nottingham

The service between Cowling and Kildwick Station in the Keighley district of Yorkshire is now in full working order.

Ripley, Yorks, needs a bus service, and as the G.N. Ky. cannot accede to the request of the Town Association, perhaps a private venture might do well here.

The National Construction Electrical Tramway Co., Ltd., who are working electrical cars in Scotland, are intending to inaugurate a motor bus service from Levenhall to Tranent, in place of extending the existing trolley system.

The Worthing Motor Bus Co. are making arrangements to establish a regular service between Worthing and Brighton. For the present, only return tickets will be issued at a cost of one shilling and sixpence for the round trip, The Brighton Omnibus Company has placed two more vehicles on the road between Portslade and Kemp Town (practically from the far end of Hove to beyond the eastward limits of the town), and the fare charged is fourpence. We cm/inn:lid this policy to the Isle of Wight company.

A recent correspondent of the " Daily News " estimates that when all the buses in London are petrol-propelled there will be at least 5,00o of them. Calculating an average distance of too miles a day for 300 days the huge total of 150,000,000 miles per annum is reached, necessitating a consumption of some 21,500,000 gallons of petrol or alcohol.

The initial trip of the Llangollen to Bettws-y-coed service was inaugurated on the 15th inst. by an influential load of passengers starting from the first-named town. The chief promoters, Sir Watkin Wynn, Sir Henry B. Robertson, Captain W. Best, Mr. J. H. Davies (Chairman of Llangollen Urban Council) were present, as also Colonel Parr Lyres and Major Leadbetter (Chief Constable of Denbighshire). The distance is some thirty-three miles, and the outward and homeward trip was covered in just under six hours. The route is via Corwen, Cerrig-y-Druidion, and Pentre Voelas, and will link up many places in Snowdonia which have been hitherto quite inaccessible except to those owning their own vehicles, The vehicle was a Wolseley. The controversy at Worthing between the local bus company and the Corporation has been settled. The directors decided to discontinue the running of Sunday buses, and last week end the streets were without the convenient services that had been established. The company must, of course, know best how its interests will be served; anyway, the public will be the final arbiters.

Mr. Bonar Law, Parliamentary Secretary to the Board of Trade, recently stated in the House of Commons that only 429 miles of track have been constructed and opened for traffic out of t,567 miles authorised under the Light Railways Act. The cost of the Light Railway Commission had been ,22,991 from the commencement of the Act to date, or „4,754 per mile in operation. We hope to see motor omnibuses used instead of rail cars over some of the 1,138 miles of route sanctioned but untouched.

The contest between the interests of railway companies and municipal authorities owning electric tramway undertakings has been advanced a further stage by the decision of the Select Committee of the House of Conunons over which Colonel H. F. Bowles presided last week. The General Powers Bill promoted by the North-Eastern Railway was opposed by the Newcastle, Bradford and Hull Corporations, which objected to the risk of competition with their undertakings. After hearing counsel and witnesses on behalf of all the interested parties, the Chairman finally announced that the committee were of opinion that the preamble was proved as regards clause 38 (that relating to the omnibuses) with certain alterations. The effect of the alterations, as embodied in the clause, is that the railway company retain the right to pick up and set down passengers en route; that the railway company may fix on a destination to which the omnibuses will run from a station or an hotel; that the local authority in the case of cities, boroughs, and uriem districts is to prescribe the route; that the company may appeal to the local authority to vary or extend the route; and that in the event of refusal the railway company shall have the right of appeal to the Board of Trade. A sub-section provides that " nothing contained in this clause shall authorise the company to run any railway omnibus in any city, borough, or urban district otherwise than to or from the station or hotel without the local authority's written consent.