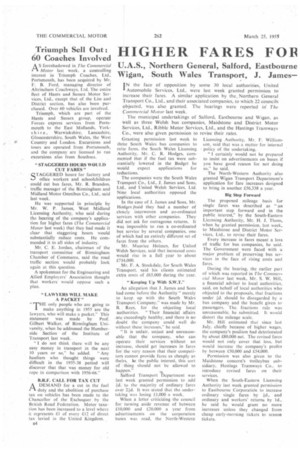 Page 30, 25th March 1955 — Triumph Sell Out: 60 Coaches Involved
Close
Noticed an error?
If you've noticed an error in this article please click here to report it so we can fix it.
Keywords : Portsmouth, Business / Finance

AS foreshadowed in The Commercial Motor last week. a controlling interest in Triumph Coaches. Ltd., Portsmouth, has been acquired by Mr. F. B. Ford, managing director of Altrincham Coachways, Ltd. The entire fleet of Hants and Sussex Motor Services. Ltd., except that of the Liss and District section, has also been purchased. Over 60 vehicles are involved.

Triumph, which are part of the Hants and Sussex group, operate Forces express services from Portsmouth to the East Midlands, Yorksh i r e, Warwickshire. Lancashire. Gloucestershire, South Wales, the West • Country and London. Excursions and tours are operated from Portsmouth. and the company are licensed to run excursions also from Southsea.

He was supported in principle by Mr. W. P. James, West Midland Licensing Authority, who said during the hearing of the company's application for higher fares (The Commercial Motor last week) that they had made it clear that staggering hours would substantially reduce costs. He commended it to all sides of industry.

Mr. C. E. Jordan, chairman of the transport committee of Birmingham Chamber of Commerce. said the road traffic section would probably look again at this question.

A spokesman for the Engineering and Allied Employers' Association thought that workers would oppose such a plan.

"LAWYERS WILL MAKE A PACKET"

" THE only people who arc going to make anything in 1955 are the lawyers, who wilt make a packet." This statement was made by Prof. Gilbert Walker, of Birmingham University, when he addressed the Humberside Section of the Institute of Transport last week.

"I do not think there will be any easy money in transport in the next 10 years or so," he added. "Any hauliers who thought things were difficult in the 1935-38 period will discover that that was money for old rope in comparison with 1956-66."

A DEMAND for a cut in the fuel r"‘ duty and the abolition of purchase tax on vehicles has been made to the Chancellor of the Exchequer by the British Road Federation. Motor taxation has been increased to a level where it represents £1 of every £12 of direct tax levied in the United Kingdom.