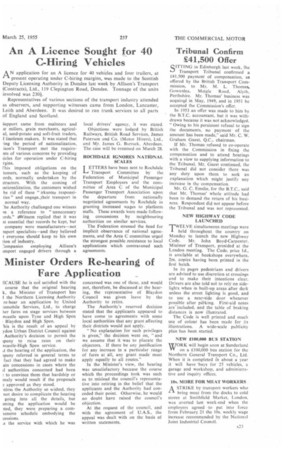 Page 25, 25th March 1955 — Tribunal Confirm £41,500 Offer
Close
Noticed an error?
If you've noticed an error in this article please click here to report it so we can fix it.
Keywords : British Transport Commission, Law / Crime

SITTING in Edinburgh last week, the Transport Tribunal confirmed a £41,500 payment of compensation, as offered by the British Transport Commission, to Mr. M. L. Thomas, Ciowanlea, tvleigle Road, Alyth, Perthshire. Mr. Thomas' business was acquire,d in May, 1949, and in 1951 he accepted the Commission's offer.

In 1953 an offer was made to him by the B.T.C. accountant, but it was withdrawn because it was not acknowledged. " Owing to his persistent refusal to sign the documents, no payment of the amount has been made," said Mr. C. W. Graham Guest, Q.C., chairman_ If Mr. Thomas refused to co-operate with the Commission in fixing the compensation and to attend hearings with a view to supplying information.to the Tribunal, Mr. Guest continued, the Tribunal did not consider there was any duty upon them to seek an explanation which might justify any increase in the compensation.

Mr. G. C. Ernslie. for the B.T.C., said that Mr. Thomas' whole attitude had been to demand the return of his business. Respondent did not appear before the Tribunal and was not represented.

TWELVE simultaneous meetings were A held throughout the country on Monday to launch the new Highway Code. MT. John Boyd-Carpenter, Minister of Transport, presided at the London meeting. The Code, price Id., is available at bookshops everywhere, 2m. copies having been printed in the first batch.

In its pages pedestrians and drivers are advised to use discretion at crossings and to make their intentions clear. Drivers are also told not to rely on sidelights when in built-up areas after dark unless the street lighting is good, and to use a near-side door whenever possible after parking. First-aid notes are'included, and the table of braking distances is now illustrated.

The Code is well printed and much use of colour has been made for its illustrations. A wide-scale publicity plan has been started.

WORK will begin soon at Sunderland on a £100,000 bus station for the Northern General Transport Co., Ltd. When it is completed rn about a year it will have 'bays for 25 vehicles, a garage and workshop, and administrative and inquiry offices.

A STRIKE by transport workers who bring meat from the docks to cold stores at Smithfield Market, London, was averted last week-end when the employers agreed ,to put into force from February 21 the 10s. weekly wage increase recommended by the National Joint Industrial Council.