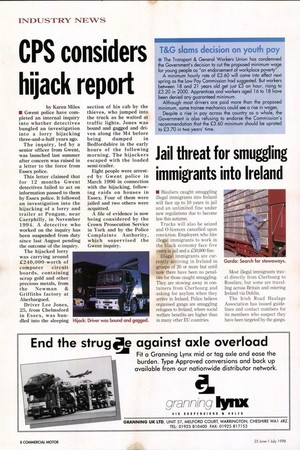 Page 10, 25th June 1998 — CPS considers hijack report by Karen Miles • Gwent police
Close
Noticed an error?
If you've noticed an error in this article please click here to report it so we can fix it.

have completed an internal inquiry into whether detectives bungled an investigation into a lorry hijacking three-and-a-half years ago.

The inquiry, led by a senior officer from Gwent, was launched last summer after concern was raised in a letter to the force from Essex police.

This letter claimed that for 12 months Gwent detectives failed to act on information passed to them by Essex police. It followed an investigation into the hijacking of a lorry and trailer at Pengam, near Caerphilly, in November 1994. A detective who worked on the inquiry has been suspended from duty since last August pending the outcome of the inquiry.

The hijacked lorry was carrying around L240,000-worth of computer circuit boards, containing scrap gold and other precious metals, from the Newman & Griffiths factory at Aberbargoed.

Driver Lee Jones, 25, from Chelmsford in Essex, was bundled into the sleeping section of his cab by the thieves, who jumped into the truck as he waited at traffic lights. Jones was bound and gagged and driven along the M4 before being dumped in Bedfordshire in the early hours of the following morning. The hijackers escaped with the loaded semi-trailer.

Eight people were arrested by Gwent police in March 1996 in connection with the hijacking, following raids on houses in Essex. Four of them were jailed and two others were acquitted.

A file of evidence is now being considered by the Crown Prosecution Service in York and by the Police Complaints Authority, which supervised the Gwent inquiry.