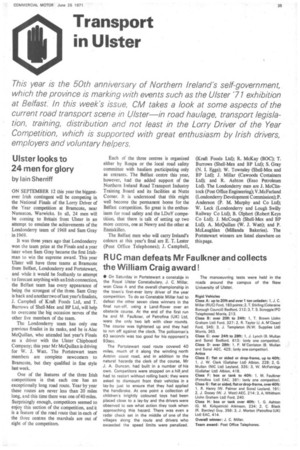 • On Saturday in Portstewart a constable in the Royal Ulster Constabulary, J. C. Millar, won Class A and the overall championship in the town's first-ever lorry driver of the year competition To do so Constable Millar had to defeat the other seven class winners in the final run-off, using a Land-Rover over an obstacle course. At the end of the first run he and M. Faulkner, of Petrofina (UK) Ltd, were the only two left with clear rounds. The course was tightened up and they had to run off against the clock. The policeman's 63 seconds was too good for his opponent's 93sec.

The Portstewart road route covered 40 miles, much of it along the winding north Antrim coast road, and in addition to the natural hazards the clerk of the course, Mr J. A. Duncan, had built in a number of his own. Competitors were stopped on a hill and had to restart without rolling back: they were asked to dismount from their vehicles in a lay-by just to ensure that they had applied the handbrake. At one point a collection of children's brightly coloured toys had been placed close to a lay-by and the drivers were observed to see what action they took when approaching this hazard. There was even a radar check set in the middle of one of the villages along the route and drivers who exceeded the speed limits were penalized.

The manoeuvring tests were held in the roads around the campus of the New University of Ulster.