Getting Ready for the Royal Show. 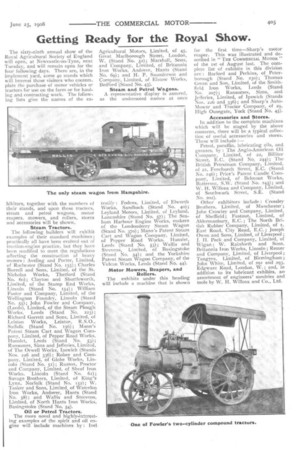 The sixty-ninth annual show of the Royal Agricultural Society of England will open, at Newcastle-on-Tyne, next Tuesday, and will remain open for the four following days. There are, in the implement yard, some 40 stands which will interest those visitors who contem_ plate the purchase of motor vehicles or tractors for use on the farm or for hauling and contracting work. The following lists give the names of the ex hibitors, together with the numbers of their stands, and upon these tractors, steam and petrol wagons, motor reapers, mowers, and rollers, stores and accessories will be shown.

The more novel and highly-interesting examples of the spirit and oil engine will include machines by ; Ivel

A representative display is assured, as the undernoted names at once

for the first time—Sharp's motor reaper. This was illustrated and described in "THE COMMERCIAL MOTOR of the 1st of August last. The complete list of exhibits in this division are : Barford andPerkins, of Peterborough (Stand No. 230); ThomasGreen and Son, Limited, of the Smithfield Iron Works, Leeds (Stand No. 207); Ransomes, Sims, and Jefferies, Limited, of Ipswich (Stands Nos. 226 and 336); and Sharp's AutoMower and Tractor Company, of 29, High Ousegate, York (Stand No. 45).

In addition to the complete machines which will be staged by the above concerns, there will be a typical collection of useful accessories and stores. These will include :—