What is a carrier? 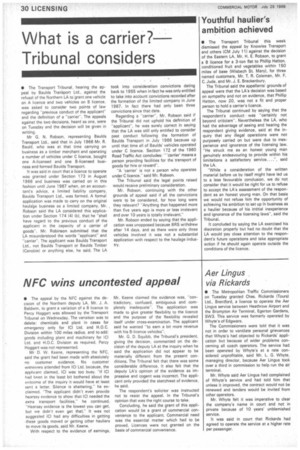 Page 32, 25th July 1969 — What is a carrier?
Close
Noticed an error?
If you've noticed an error in this article please click here to report it so we can fix it.
Keywords : Logistics, Transport, Law / Crime, Business / Finance

• The Transport Tribunal, hearing the appeal by Baulds Transport Ltd., against the refusal of the Northern LA to grant one vehicle on A licence and two vehicles on B licence, was asked to consider two points of law regarding "previous conduct of the applicant" and the definition of a "carrier". The appeals against the two decisions, heard as one, were on Tuesday and the decision will be given in writing.

Mr G. N. Robson. representing Baulds Transport Ltd., said that in July 1966 Mr. R. Bauld, who was at that time carrying on business as a timber merchant and operating a number of vehicles under C licence, bought one A-licensed and one B-licensed business and formed Baulds Transport.

It was said in court that a licence to operate was granted under Section 173 in August 1966 and business was carried on in this fashion until June 1967 when, on an accountant's advice, a limited liability company, Baulds Transport Ltd., was formed. A formal application was made to carry on the original haula■ge business as a limited company. Mr. Robson said the LA considered this application under Section 174 (4) (b), that he "shall have regard to the previous conduct of the applicant in the capacity of a carrier of goods". Mr. Robinson submitted that the LA misunderstood the words "applicant" and "carrier". The applicant was Baulds Transport Ltd., not Baulds Transport or Baulds Timber (Canobie) or anything else, he said. The LA

took into consideration convictions dating back to 1955 when in fact he was only entitled to take into account convictions recorded after the formation of the limited company in June 1967. In fact there had only been three convictions since that date.

Regarding a "carrier", Mr. Robson said if the Tribunal did not uphold his definition of "applicant", he was surely correct in saying that the LA was still only entitled to consider past conduct following the formation of Baulds Transport in July 1966 because up until that time all of Baulds' vehicles operated under C licence. Section 172 of the 1960 Road Traffic Act concludes: "'carrier' means a person providing facilities for the transport of goods for hire or reward".

"A 'carrier' is not a person who operates under C licence," said Mr. Robson.

Mr. Robson, continuing with the other grounds of appeal said if all the convictions were to be considered, for how long were they relevant? "Anything that happened more than five years ago is more or less irrelevant and over 10 years is totally irrelevant."

Mr. Robson ended by saying that the application was unopposed because BRS withdrew after 14 days, and as there were only three vehicles involved it was not a substantial application with respect to the haulage industry.