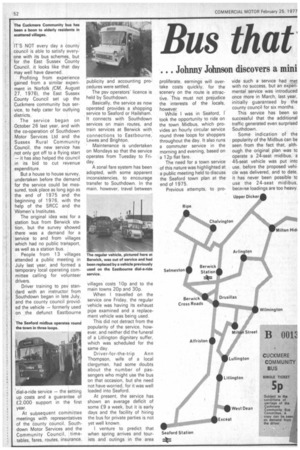 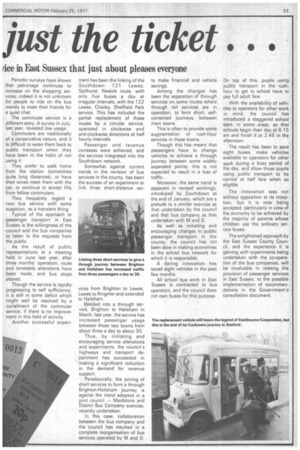 Tice in East Sussex that just about pleases everyone

IT'S NOT every day a county council is able to satisfy everyone with its bus schemes, but for the East Sussex County Council, it looks like that day may well have dawned.

Profiting from experience gained from a similar experiment in Norfolk (CM, August 27, 1976), the East Sussex County Council set up the Cuckmere community bus service, to help cater for outlying districts.

The service began on October 26 last year, and with the co-operation of Southdown Motor Services Ltd and the Sussex Rural Community Council, the new service has not only got off to a flying start — it has also helped the council in its bid to cut revenue expenditure.

But a house to house survey, undertaken before the demand for the service could be measured, took place as long ago as the end of 1975 and the beginning of 1976, with the help of the SRCC and the Women's Institutes.

The original idea was for a station bus from Berwick station, but the survey showed there was a demand for a service to and from villages which had no public transport, as well as a station bus.

Driver training to psv standard with an instructor from Southdown began in late July, and the county council provided the vehicle -formerly used on the defunct Eastbourne dial-a-ride service the setting up costs and a guarantee of £2,000 support in the first year.

The psv operators' licence is held by Southdown.

Basically.. the service as now operated provides a shopping service to Seaford or Hailsham. It connects with Southdown services on main routes, and train services at Berwick with connections to Eastbourne, Lewes and Brighton.

Maintenance is undertaken on Mondays so that the service operates from Tuesday to Friday.

A zonal fare system has been adopted, with some apparent inconsistencies, to encourage transfer to Southdown. In the main. however, travel between villages costs 10p and to the main towns 20p and 30p.

When I travelled on the service one Friday, the regular vehicle was having its exhaust pipe examined and a replacement vehicle was being used.

This did not detract from the popularity of the service, however, and neither did the funeral of a Litlington dignitary suffer, which was scheduled for the same day.

Driver-for-the-trip Ann Thompson, wife of a local clergyman, had some doubts about the number of passengers who might use the bus on that occasion, but she need not have worried, for it was well loaded into Seaford.

At present, the service has shown an average deficit of some £9 a week, but it is early days and the facility of hiring the bus for private parties is not yet well known.

I venture to predict that when spring arrives and tourists and outings in the area proliferate, earnings will overtake costs quickly, for the scenery on the route is attractive. This must not prejudice the interests of the locals, however While I was in Seaford, took the opportunity to ride on the town Midbus, which provides an hourly circular service round three loops for shoppers throughout the day. It also runs a commuter service in the morning and evening, based on a 12p flat fare.

The need for a town service of this nature was highlighted at a public meeting held to discuss the Seaford town plan at the end of 1975.

vide such a service had .met with no success, but an experimental service was introduced once more in March, last year, initially guaranteed by the county council for six months.

This service has been so successful that the additional traffic generated even surprised Southdown.

Some indication of the popularity of the Midbus can be seen from the fact that, although the original plan was to operate a 24-seat midibus, a 45-seat vehicle was put into use, before the proposed vehicle was delivered, and to date, it has never been possible to use the 24-seat midibus, because loadings are too heavy. Periodic surveys have shown that patronage continues to increase on the shopping services; indeed it is not unknown for people to ride on the bus merely to meet their friends for a quiet chat.

The commuter service is a different story. A survey in July, last year, revealed low usage.

Commuters are traditionally of a conservative nature, and it is difficult to wean them back to public transport when they have been in the habit of not using it.

They prefer to walk home from the station (sometimes quite long distances), or have their wives meet them with the car, or continue to accept lifts from fellow commuters.

They frequently regard a new bus service with some suspicion, as a transient thing.

Typical of the approach to passenger transport in East Sussex is the willingness of the council and the bus companies to listen to the requests from the public.

As the result of public representations at a meeting held in June last year, after three months' operation, route and timetable alterations have been made, and bus stops altered.

Though the service is rapidly progressing to self sufficiency, it is still in some deficit which might well be resolved by a curtailment of the commuter service, if there is no improvement in this field of activity.

Another successful experi ment has been the linking of the Southdown 121 Lewes, Spithurst, Newick route, with only five buses a day at irregular intervals, with the 122 Lewes, Chailey, Sheffield Park service. This has included the partial replacement of these routes by a circular service, operated in clockwise and anti-clockwise directions at half hourly intervals.

Passenger and revenue increases were achieved, and the services integrated into the Southdown network.

Somewhat against current trends in the revision of bus services in the county, has been the success of an experiment to link three short-distance ser vices from Brighton to Lewes, Lewes to Ringmer and extended to Hailsham.

Welded into a through service, Brighton to Hailsham in March, last year, the service has increased passenger usage between these two towns from about three a day to about 30.

Thus, by initiating and encouraging service alterations and experiments, the council's highways and transport department has succeeded in making a significant reduction in the demand for revenue support_ Paradoxically, the joining of short services to form a through Brighton-Hailsham journey is against the trend adopted in a joint council -Maidstone and District Bus Company exercise, recently undertaken_ In this case, collaboration between the bus company and the council has resulted in a complete reorganisation of bus services operated by M and D, to make financial and vehicle savings.

Among the changes has been the separation of through services on some routes where through rail services are in operation, to form short, selfcontained journeys, between main towns.

This is often to provide some augmentation of rush-hour services in these towns.

Though this has meant that passengers have to change vehicles to achieve a through journey between some widely separated points, this is not expected to result in a loss of traffic.

Moreover, the same trend is apparent in revised workings, introduced by Southdown at the end of January, which are a prelude to a similar exercise as that undertaken by the council and that bus company as that undertaken with M and D.

As well . as initiating and encouraging changes in public passenger transport in the county, the council has not been slow in making economies in the school bus network for which it is responsible.

A daring innovation has saved eight vehicles in the past few months.

All school bus work in East Sussex is contracted to bus operators, and the council does not own buses for this purpose. On top of this, pupils using public transport in the rushhour to get to school have to pay full adult fare.

With the availability of vehicles to operators for other work in mind, the council has introduced a staggered school start, in some areas, so that schools begin their day at 8.15 am and finish it at 2.45 in the afternoon.

The result has been to save eight buses, make vehicles available to operators for other work during a busy period of the day, and allow those pupils using public transport to be carried at half fare when so eligible.

The innovation was not without opposition at its inception, but it is now being accepted, particularly in view of the economy to be achieved by the majority of parents whose children use the ordinary service buses.

The enlightened approach by the East Sussex County Council, and the experience it is gaining with experiments being undertaken with the co-operation of the bus companies, will be invaluable in relating the provision of passenger services in East Sussex, to the possible implementation of recommendations in the Government's consultation document.