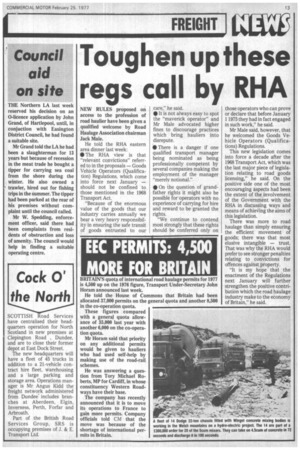 Page 17, 25th February 1977 — EEC PERMITS: 4,500 MORE FOR BRITAIN
Close
Noticed an error?
If you've noticed an error in this article please click here to report it so we can fix it.
Keywords : Horam, Wealden, Other, Politics

BRITAIN'S quota of international road haulage permits for 1977 is 4,500 up on the 1976 figure, Transport Under-Secretary John Horam announced last week.

He told the House of Commons that Britain had been allocated 37,000 permits on the general quota and another 8,500 in the co-operation quota.

These figures compared with a general quota allowance of 35,000 last year with another 6,000 on the co-operation quota.

Mr Horam said that priority on any additional permits would be given to hauliers who had used self-help by making use of the road-rail schemes.

He was answering a question from Tory Michael Roberts, MP for Cardiff, in whose constituency Western Roadways have their base.

The company has recently announced that it is to move its operations to France to gain more permits. Company officials told CM that the move was because of the shortage of international permits in Britain.