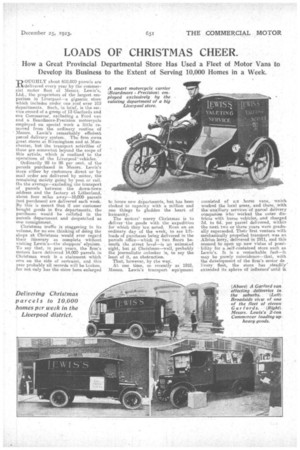 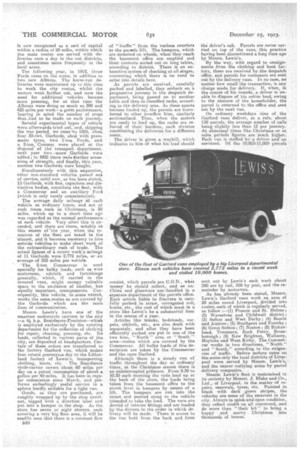 Page 9, 25th December 1923 — LOADS OF CHRISTMAS CHEER.
Close
Noticed an error?
If you've noticed an error in this article please click here to report it so we can fix it.
Keywords : Van, Delivery, Express Mail, Postal System Of The United Kingdom, Royal Mail

Flow a Great Provincial Departmental Store Has Used a Fleet of Motor Vans to Develop its Business to the Extent of Serving 10,000 Homes in a Week.

delivered every year by the commercial motor fleet of :Messrs. Lewis's, Ltd., the proprietors of the largest emporium in Liverpool—a gigantic store which includes -under one roof over 100 departments. Such, in brief, is the service record of a group of 13 Garfords and one Commercar, excluding a Ford van and a Beardmore-Precision motorcycle employed on special work a little removed from the ordinary routine of

• Messrs. Lewis's remarkably efficient parcel delivery system. The firm owns great stores at Birmingham and at Manchester, but the tranSport activities of these are somewhat beyond the scope of this article, which is confined to the Operations of the Liverpool vehicles.

Ordinarily 90 to 95 per cent., of the parcels purchased in MessrsLewis's store either by customers direct or by mail order are delivered by motor, the remaining moiety going by post or rail. On the average—excluding the transport of parcels between the down-town address and the factory at Litherland, about four miles away-10,000 parcels (not purchases) are delivered each week. Tiy this is meant that if One customer bought goOds in five departments, the purchases would be collared in the parcels department and despatched as one consignment.

Christmas traffic is staggering in its volume, for no coo thinking of doing the shops at Christmas 'would ever regard their itinerary as complete without visiting Lewis s—the shoppers' elysium. To say that, in past years, the firm's motors have delivered 14,000 parcels in • Christmas week is a statement which errs on the side of restraint, and. this year probably all records will be broken, • for not only has the store been enlarged

to house new departments, but has been choked to capacity with a million and one things to gladden the heart of humanity.

The motors' merry Christmas is to deliver --the goods with the expedition for which they are noted. Even on an ordinary day of the week, to see liftloads of purchases being delivered in the pax-60s office—which is two floors beneath the street level—is an animated sight, but at Christmas—well, probably the journalistic onlooker is; to say the least of it, an obstruction.

That, however, by the waY.

At. one time, so recently as 1910, Messrs. Lewis's transport. equipment

• consisted of six hal-Se vans, winch worked the local areas, and these, with the: auxiliary services of parcel -delivery companies who worked the outer districts with horse vehicles,_and charged 3d. to 6d. per parcel delivered, within the next two or three years were gradually superseded. Their first venture with mechanically propelled transport was an Albion lorry, delivered in 1911, and this seemed to open up new vistas of possibility for a self-contained store such as Lewis's. It is a remarkable fact—it may be purely coincidence—that, with the developmentof the firm's motor de livery fleet, the store has steadily-` extended its sphere of influenceuntil -rt is now recognized as a sort of capital within a radius of 20 mites, within which the main routes are cerved with deliveries once a day in the out districts, and sometimes more frequently in the local areas.

The following year, in 1912, three "Fords came on the scene, in addition to two new AlMons. The horse-van deliveries were maintained up to this time to work the city routes, whilst the motors went farther out, and soon the need for additional vehicles became more pressing, for at that time the Albions were doing as much as. 390 and 425 miles per week—a great performance, bearing in mind the number of stops that stied to be made on each journey.

*Seveia1 experimental types of vehicle were afterwards, tried out, and, skipping the war Period we come -to 1920, when four 30-cwt. Garfords, shod with pr,eumatie tyres, two 1-ton Fords, and. a 2-ten Commei were placed at the disposal' of the transport department. next year two more Garfords were added ; in 1922 there wa-eiurther aecessions of strength, and finally, this year, another two Garfords were bought.

Simultaneously with this expansion, other non-standard vehicles passed out of service, until now, as has been stated, 13 Garfords, with fine, capacious and distinctive bodies., constitute the fleet, with a Commerear and an auxiliary Ford (which is only rarely commissioned).

The average daily mileage tif each vehicle at erdinary times, and not at rush times such as Christanas, is 50 miles, which up to a short time ago was regarded as the normal performance of each vehicle. Very often this is exceeded, and there are times, notably at this season of year, when the resources of the -fleet are taxed to the "utmost, and it becomes necessary to hire outside vehicles) to make short work of the extraordinary rush of trade. The actual figures of a recent week's mileage of 11 Garfords were 2,772 miles, or an average of 252 miles per vehicle.

The 2-ton Commercar in used specially for. bulky loads such a, wire mattresses, oilcloth and furnishings generally, which, if carried in the covered vans, might occupy valuable space to the exclusion of smaller, but equally important, consignments. Consequently, this vehicle. to come extent, works the same, routes as are covered by the Garforde which are the main lines of communication.

Messrs. Lewis's have one of the smartest motorcycle carriers in the city

41, h.p. Beardmore-Precision—whit:it is employed exclusively by the valeting department for the collection of clothing for repair, cleaning, pressing, etc. Its loads, collected in various parts of the city, are deposited at headquarters. Certainof these orders are transferred to the factory Garford van, which makes four return journeysa day to the Litherland factory of Lewis's, transporting clothing, boots, etc. The Beardmore cycle-carrier covers about 60 miles per day on a petrol -consumption of about a gallon per 40 miles. It has been in regular commission since Marsh, and performs exCeedingly useful service in a sphere hardly suitable for a light van.

Goods, as they are purchased, are roughly wrapped up by the shop assistant, tagged with a direction label and put into a hamper in the shop. As the store has seven or eight storeys, each covering a very big floor area, it will be readily seen that there is a constant flow

B28 of " traffie " from the various counters to the pareels lift. The hampers, which are mounted on wheels, when they reach the basement office are . emptied and their contents sorted out on long tables, according to district. There is an exhaustive system of checking at all stages, concerning which there is no need to enter into details here.

As parcels are received, carefully packed and labelled, they embark on a progressive journey in the despatch department, being passed on to another table and then to classified reeks, according to the delivery area. As these spaces become loaded up, the parcels are transferred to other overflow bins, similarly sectionalized. Thus, when the motors are ready to load -up, the racks are relieved of their burdens, each division constituting the deliveries for a different route.

The driver is given a waybill, which indicates to him of what his load should consist, which parcels are C.O.D., what meney he should collect, and se on. China and glassware are 'handled in a separate department of the parcels office. Each article liable to fracture is carefully packed in straw, corrugated roll, boxes, etc., the cost of which must in a store like Lewis's be a substantial item in the course of a year.

Articles like trunks, bedsteads, carpets, oilcloth, etc., are also dealt with separately, and after they have been efficiently packed are put in one of the two bins, "North " area or " South " area—routes which are covered by the Commerear. All bulky loads of this description are taken by the Commercar and the open Garford.

• Although there is a steady run of traffic throughout the day at ordinary times, at the Christmas season there is an uninterrupted pressure. From 9.30 to 10.30 each morning the vans load up at the hack of the store, the loads being taken from the basement office to the street level in hampers by means of a lift. The hampers are run into the street and pushed along to the vehicle intended to take the load. The vans are devoid of interior fittings and are loaded by the drivers in the order in which delivery will be made. There is access to the van both from the back and from the driver's cab. Parcels are never car" ried on top of the vans, this practice having been discontinued a long time ago by Messrs. Lewis's.

By the way, with regard to consigns ments from the clothing and boot factory, these are received by the despatch office, and parcels for customers are sent out by the delivery vans. In no case, no matter how small the transaction, is any charge made for delivery. If, when, in the course of his rounds, a driver is unable to dispose of his entire load, owing to the absence of the householder, the parcel is returned to the office and sent out by the next van.

On ordinary weekdays nine of the Garford vans deliver, as a rule, about 130 parcels, the average number of calls being slightly less than 15 per journey. At abnormal times like Christmas Or at sales periods figures are much higher. Each van is staffed by a driver and' an assistant. Of the 10,000-11,000 parcels sent out by Lewis's each week about 250 are by rail, 503 by post, and the remainder by motorvan. As has already been stated, Messrs. Lewis's Garford vans work as area of 20 miles round Liverpool, divided into routes, each of which is regularly served, as follow :—(1) Preseot and St. Helens; (2) Wavertree and Childwall district; (3) Sefton and West Derby; (4) Bootle and Aintree; (5) Southport and Formby; (6) Great Sutton ; (7) Neston ; (8) Birkenhead, Tranmere, Rock Ferry, Bromborough ; (9) New Brighton Wallasey, Hoylake and West Kirby. The Commercar works in two directions, " North " and "South," according to the exigencies of traffic. Before motors came on the scene only the local districts of Liverpool were served by Messrs. Lewis's, and the nearer outlying areas by parcel delivery companies.

Messrs. Lewis's fleet. is maintained in its entirety by Messrs. J. Blake and Co., Ltd., of Liverpool, in the matter of repairs, renewals, tyres, etc. Painted in black with dark green stripes, the vehicles are some of the smartest in the city. Always in spick-and-span condition, they reflect credit on all concerned, and do more than "their bit" to bring a happy and merry Christmas into thousands of homes.