THE ROMANCE OF THE ROYAL MAIL. 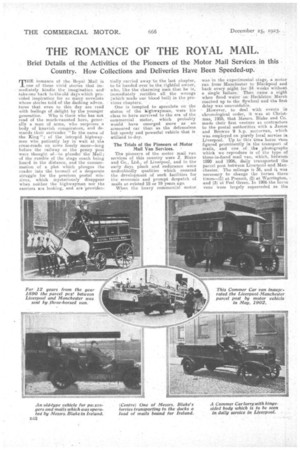 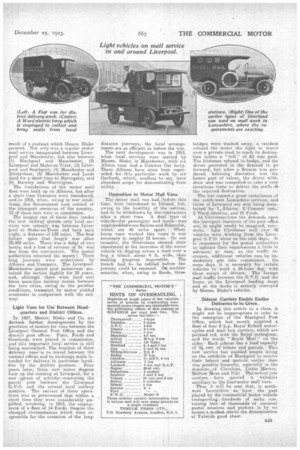 Country. How Collections and Deliveries Have Been Speeded-up.

THE romance of the Royal Mail is one of those vivid stories that immediately kindle the imagination andtakeome back to iheold dayswhich provided inspiration for so many novelists whose stories told of the dashing adventures that even to this day are read with feelings of delight by the younger generation. Who is there who has not read of the much-vaunted hero, generally a man of arms, who surprises a body of knavish conspirators, and demands their surfender "In the name of the King"; of the intrepid highwaymen who patiently lay in wait at the cross-roads on some lonely moor—long before the railway or the penny post wexe thought of—to plunder the Mail; of the rumble of the stage coach being heard in the distance, and the consummation of a plot which plunges the reader into the turmoil of a desperate struggle for the precious postal missives, which mysteriously disappear when neither the highwayman nor the carriers are leaking, and are-providen tially carried away -to the last chapter, to be handed over to the rightful owner, who, like the charming Man that he is, immediately rectifies all the wrongs (which made our blood boil) in the pre

vious chapters. . • One is tempted to speculate on the status of the highwayman, were his class to have survived to the era of the c.oremercial thotor, which probably would have emerged more as an armoured car than as the defenceless but speedy and powerful vehicle that is utilized to-day.

The Trials of the Pioneers of Motor Mail Van Senices.

The pioneers of the motor mail van services of this country were J. Blake and Co., Ltd., of Liverpool, and in the early days pluck and endurance were undoubtedly qualities which en sured the development of such facilities far the economic and prompt despatch of mails as existed 18 or 19 years ago.

When the heavy commercial motor was in the experimental stage, a motor ran from Manchester to Blackpool and back every night for .54 weeks withoat a single failure.. Then came a night when flood water onHeckleten Marsh reached up to the flywheel and the first delay was unavoidable. However, to deal with events in chronological order, it was at Christmas, 1905, that Messrs. Blake and Co. made their first venture as contractors to the postal authorities with a James and Browne 9 h.p. motorvan, which was employed on purely local serviee in Liverpool. Up to this time horse vans figured prominently in the transport of mails, and one of the photographs which we reproduce is of the type of three-in-hand mail van, which, between 1890 and 1906, daily transported the parcel post between Liverpool and Manchester. The mileage is 35, and it was necessary to change the horses three times—(1) at Prescot, (2) at Warrington, • and (3) at Peel Green. In 1906 the horse vans were largely superseded as the

The foundations of the motor mail fleet were built up on AIbions, but after a short. time Co/inners were introthiced, and in 1916, when, owing to war conditions, the Government took control of the transport, resources of the country, 12 of these. cars Were in commission. The longest ran of those days (under the neW railway systern only local ser. vices now reinarri) .11.a8 between Liverpool to Stoke-on-Trent and back each night, .a diltance of 132 miles. The first failure upon that length was 'after 32,400 miles. There was a delay of two hours, and a loss of.-reVenue of 8s. was due from the contractors. The postal authorities returned the money ! These long journeys were undertaken by Albions and Gommers. The LiverpoolManchester parcel post moteryans sustained the service nightly for 11B years, arid, although there were (and are) three main-line railway routes between the two cities, owing to the peculiar conditions, transport by motor yielded economies in comparison with the railway.

Light Vans for the Between Headquarters and District Offices.

In 1907, Messrs. Blake and Co. nn. dertook further developments by the provision of motors for runs between the Liverpool General Pest Office and the district post offices. Fiats, Fords and Overlands were placed in commission, and this important local service is still being maintained. The function of these delivery vans' is to, travel between the v.arelous offices and to exchange mails intended for delivery in particular localitiet by the distriet postmen. Four years later, three . new motor Wagons took up the running at Liverpool, for a new sphere of activity—conveying the parcel past bettteen the Liverpool G.B.O. and the several local railway statiens. The success of these operations was so pronounced that within a short time they were considerably amplified, involving, in 1013, the employment of a fleet of 14 Fords. Despite the changed circumstances which were responsible for 'the cessation of the long

distance journeys, the local arrangements are as efficient as before. the war.

The next development was in 1913, when local services wore started by. Messrs. Blake, in Manchester, with six Albion vans and a Commer Car lorry. These Albins have since been superseded for this particular work by six Garfords, which, needless to say, have abundant scope for demonstrating their Opposition to Motor Mail Vans.

The motor mail van had, • before this time, been introduced to Ireland, hut, owing to the hostility of the natives, had to he Withdrawn by the contractors after a short time. A dual type of vehicle---r-for passengers and -ntails—w.as emiployedsbetwe err Ballinia and Belniullet, which • are 40 miles apart. When horse vans worked this route it was necessary to employ 18 horses. On one occasion, the Ilibernians showed their resentment at the incursion of the motor vehicle by digging across a road over a boga trench about 4 ft wide, thus making progress impossible. The trench had to be refilled before the journey could be resumed. On another occasion, when, owing to floods, three bridges were washed away, a resident refused t:he motor the right to travel over a private road to reaoh its destination unless a "toll" of £i was paid. The Irishman refused to budge, and the driver persisted .in the demand to go forward, but when a firearm was produced, believing discretion was the better part of valour, the driver withdrew and was compelled to take a very circuitous route to deliver the mails at the required. destination, The War caused ,a, great curtailment of the south-west Lancashire services, and those of Liverpool are now being main

'At. Christmas-time the demands upon the transport resources of the post office are, as might Madly be imagined, enormous:: Last Christmas well over 40 vehicles were Working from the Liver pbol 'alone On the rush days. It is-customary for the postal authorities to'indicate their requirements a little in advance,' so -that, as the traffic increases, additional vehiclescan. he im, therliately put into commission, On some days it is necessary for ziertain vehicles to work a 24-hour day, with three .relays of drivers. The foreign mail traffic between the G.P.O. and the liners at the Liverpool ,landing stage and at the docks 13 entirely conveyed by Messrs. Blake's vehicles.

Sidecar Carriers Enable Earlier Deliveries to be Given.

In drawing this article to a close, it might not be inappropriate to refer to the enterprise of the Blackpool Post Office, which last month acquired a fleet of four B h,p. Royal Enfield motorcycles and mail box carriers, which are painted red, with the Royal monageam, and the lio-rcis "F,,riyal Mail" on the sides:: Each sidecar has a load capacity of 2i cwt. of lettets aiid parcelS. This new service has enabled people living on the outskirts of Blackpool to receive their 'letters and -parcels, earlier than was possible formerly, especially if) the districts„of Cieveleys, Little; .,Marten, Mallon Moss and Peel ..Themotorcycle carriers have ,-proYeel 'valuable auxiliary to the four.motor mail vans.

Thus it. will be seen that, in smithWest Lancashire a'-least the part played by the caramel:dal-met-or vehicle transportinghundreds , of sacks containing tens of thousands. of seasonal postal missives and packets is by nomeans a modest ,eheifin the dissemination of Yuletide good cheer.