THE LATEST IN STEAM TRACTORS. 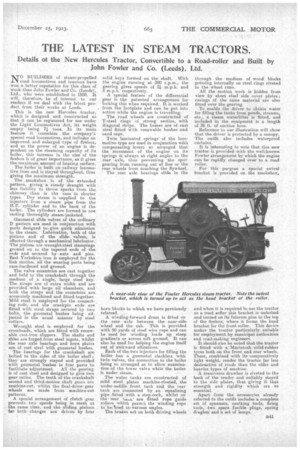 Page 23, 25th December 1923 — THE LATEST IN STEAM TRACTORS.
Close
Noticed an error?
If you've noticed an error in this article please click here to report it so we can fix it.

Details ot the New Hercules Tractor, Convertible to a Road-roller and Built by John Fowler and Co. (Leeds), Ltd.

N0 BUILDERS of steam-propelled road locomotives and tractors have won a better reputation for this class of work than John Fowler and Co. (Leeds), Ltd., who were established in 1850. It will, therefore, be of interest to our readers if we deal with the latest product from their works at Leeds.

This is the new Hercules tractor, which is designed and constructed so that it can be registered for use under the Light Locomotives Act, its weight empty being 71, tons. In its main feature it resembles the company's special road locomotives, and includes an improved and enlarged type of firebox, and as the power of an engine is de. pendent on the steaming capacity of its boiler, this increase in the size of the firebox is of great importance, as it gives the maximum amount of heating surface. The boiler is built on railway locomotive lines and is stayed throughout, thus giving the maximum strength. The . smokebox is of the extended pattern, giving a steady draught with less liability to throw sparks from the chimney than is the case in shorter types. Dry steam is supplied to the injectors from a steam pipe from the H.P. cylinder and to the back of the boiler. The cylinders are formed in one casting thoroughly steam-jacketed.

Gunmetal slide valves of the ordinary D pattern are used in conjunction with ports designed to. give quick admission to the steam. Lubrication, both of the pistons and of the slide: valves, is effected through a mechanical lubricator. The pistons are wrought-steel stampings ground on to the tapered ends of the rods and secured by nuts and pins. Best Yorkshire iron is employed for the link motion, all the wearing parts being ease-hardened and ground.

The valve eccentrics are cast together and held to the crankshaft through the medium of a single, large steel key. The straps are of extra width and are provided with large oil chambers, and both the straps and the eccentrics are accurately machined and fitted together. Mild steel is employed for the connecting rods, and the crankpin ends are fitted with steel straps secured by two bolts, the gunmetal bushes being adjusted in the usual manner by steel cotters.

Wrought steel is employed for the crossheads, which are fitted with renewable east-iron slippers. The shafts and axles are forged from steel ingots, whilst the rear axle bearings and horn plates are of cast steel with gunmetal bushes. The bearings for the crankshaft are bolted to the sides of the boiler shell ; they are strongly stayed and provided with gunmetal bushes in four parts to facilitate adjustment. All the gearing is of cast steel and designed to give two gear ratios. The teeth of the crankshaft second and third-motion shaft gears are machine-cut, whilst the final-drive gear wheels are made from machine-cut patterns. A special arrangement of clutch gear. prevents two speeds being in mesh at the same time, and the sliding pinions far both changes are driven by four solid keys formed on the shaft. With the engine running at 300 r.p.m., the gearing gives speeds of 2k m.p.h. and 5 m.p.h. respectively.

A special feature of the differential gear is the patented arrangement for locking this when required., It is worked from the footplate and can be put into action while the engine is travelling.

The road wheels are constructed of T-steel rings of strong section, with diagonal strips. The bosses are of cast steel fitted with renewable hushes and sand caps.

Twin laminated springs • of the locomotive type are used in conjunction with compensating levers so arranged that the movement of the engine on its springs is always at right angles to the rear axle, thus preventing the spur gearing from running out-of line or the rear wheels from touching the flywheel.

The rear axle bearings slide in the horn blocks to which we have previously referred.

A winding-forward drum is fitted on the rear axle between the near-side wheel and the cab. This is provided with 50 yards of steel wire rope and can be used for winding loads up steep gradients or across soft ground. It can also be used for helping the engine itself out of awkward situations.

Each of the two injectors for filling the boiler has a gunmetal elackbox with twin valves, the connection to the boiler being so arranged as to allow examination of the lower valve while the boiler is under steam.

The water tanks are constructed of mild steel plates machine-riveted, the under-saddle front tank and the rear tank are connected by an equalizing pipe ‘fitted with a stop-cock, whilst. on the . rear 1.aut: are, fitted rope guide rollers which permit the winding rope to-he.tised at. various angles.

The brakes act on both driving wheels through the medium of wood blocks pressing internally on steel rings riveted to the wheel rims.

All the motion work is hidden from view by sheet steel side cover plates; casings of the same material are also fitted over the gearing.

To enable the driver to obtain water for filling the tanks from ponds, streams, etc., a steam waterlifter is fitted, and included in the equipment is a length of 26 ft. of suction hose.

Reference to our illustration will show that the driver is protected by a canopy. The outfit also includes waterproof curtains.

It is interesting to note that this new tractor is provided with the well-known Fowler arrangement by which the engine can be rapidly changed over to a road roller.

For this purpose a special swivel bracket is provided on the smokebox,

and when it is required to use the tractor as a road roller this bracket is unbolted and turned on its fulcrum pins to the top of the firebox, where it forms the head bracket tor the front roller. This device makes the tractor particularly suitable for employment by municipal authorities and road-making engineers.

It should ako be noted that the tractor is fitted with a: Macintosh solid-rubber tyres both on the front and rear wheels. These, combined with its comparatively light weight, render the tractor far less destructive of roads than the older and heavier types of machine. A transverse drawbar is riveted to the back of the tender and suitably stayed to the side plates, thus giving it that strength and rigidity which are so essential.

Apart from the accessories already referred to the outfit includes a complete set of spanners, caulking tools, firing tools,' two spare fusible plugs, spring dragbar and a set of lamps.