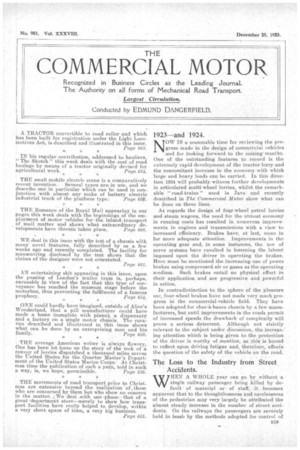 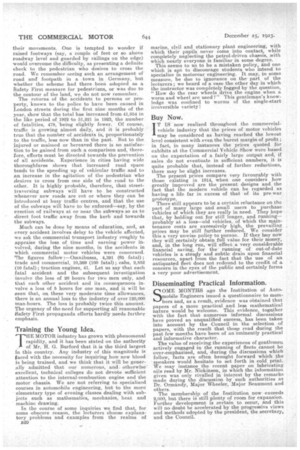 NOW IS a seasonable time for reviewing the progress made in the design of commercial vehicles and for looking forward to the coming'-months. One of the outstanding features to record is the extremely rapid development of the tractor-lorry and the concomitant increase in the economy with which large and heavy loads can be carried. In this direction 1924 will probably witness further developments in articulated multi-wheel lorries, whilst the remarkable " road-trains " used in Java and recently described in The Commercial Motor show what can be done on these lines.

As regards the design of four-wheel petrol lorries and steam wagons, the need for the utmost economy in running costs has resulted in numerous improvements in engines and transmissions with a view to increased efficiency. Brakes have, at last, come in for more adequate attention. Improvements in the operating gear and, in some instances, the use of servo systems have resulted in lessening the labour imposed upon the driver in operating the brakes. Here must be mentioned the increasing use of power brakes using compressed air or gases as the operating medium. Such brakes entail no physical effort in their application and are progressive and powerful in action.

In contradistinction to the sphere of the pleasure car, four-wheel brakes have not made very much progress in the commercial-vehicle field. They have been adopted for char-hebancs chassis by a few manufacturers, but until improvements in the roads permit of increased speeds the drawback of complexity will prove a serious deterrent. Although not strictly relevant to the subject under discussion, the ,increasing attention which is being given to the protection of the driver is worthy of mention, as this is bound to reflect upon driving fatigue and, theeefore, affects the question of the safety of the vehicle on the road.

The Loss to the Industry from Street Accidents.

WHEN A WHOLE year can go by without a single railway passenger being killed by default of material or of staff, it becomes apparent that to the thoughtlessness and carelessness of the pedestrian may very largely be attributed the almost steady increase in the number of street accidents. On the railways the passengers are severely held in leash by the methods adopted for control of

their movements. One is tempted to wonder if raised footways (say, a couple of feet or so above roadway level and guarded by railings on the edge) would overcome the difficulty, as presenting a definite check to the pedestrian who desires to cross the road. We remember seeing such an arrangement of road anti' footpath in a town in Germany, but whether the scheme had there been adapted as a safety First measure for pedestrians, or was due to the contour of the land, we do not now remember. The returns of the accidents to persons or property, known to the police to have been caused in London streets during the first nine months of the year, show that the total has increased from 41,954 in the like period of 1922 to 51,221 in 1923, the number of fatalities, 478, 'being slightly fewer. Of course, traffic is growing almost daily, and it is probably true that the number of accidents is, proportionately to the traffic, less now than in the past. But to the L injured or maimed or bereaved there is no satisfac tion to be gained from such a comparison and, therefore, efforts must be directed towards the prevention of all accidents. Experience in cities having wide thoroughfares shows that increased road space tends to the speeding up of vehicular traffic and to an increase in the agitation of the pedestrian who desires to cross from one side of the road to the other. It is highly probable, therefore, that streettraversing subways will have to be constructed whenever new roads are cut or where they can be introduced at busy traffic centres, and that the use of the subways will have to be enforced—say, by the erection of railways at or near the subways so as to direct foot traffic away from the kerb and towards the subways.

Much can be done by means of education, and, as every accident involves delay to the vehicle affected, we ask the commercial transport industry roughly to appraise the loss of time and earning power involved; during the nine months, in the accidents in which commercial motor vehicles were concerned. The figures follow :—Omnibuses, 4,391 (65 fatal); trade and commercial, 10,360 (100 fatal); cabs, 2,852 (10 fatal); traction engines, 41. Let us say that each fatal accident and the subsequent investigation involve the loss of 20 hours for two men only, and that each other accident and its consequences involve a loss of 5 hours for one man, and it will be seen that, on these very moderate time allowances, there is an annual loss to the industry of over 120,000 man-hours. The loss is probably twice this amount. The urgency of the need for supporting all reasonable safety First propaganda efforts hardly needs further emphasis.

THE MOTOR industry has grown with phenomenal rapidity, and it has been stated on the authority , of Mr. H. G. Burford that it is the third largest in this country. Any industry of this magnitude is faced with the necessity for inquiring how new blood is being trained, and we think that it will be generally admitted that our numerous, and otherwise' excellent, technical colleges do not devote sufficient attention to the internal-combustion engine and the motor chassis. We are not referring to specialized courses in automobile engineering, but to the more elementary type of evening classes dealing with subjects such as mathematics, mechanics, heat and machine drawing.

In the course of some inquiries we find that, for some obscure reason, the lecturers choose explanatory problems and examples from the realms of B20 marine, civil and stationary plant engineering, with which their pupils never come into contact, while completely neglecting the petrol-driven chassis, svith which nearly everyone is familiar in some degree.

This seems to us to be a mistaken polieyt and one which is apt to discourage students who intend to specialize in motorcar engineering. It may, in some measure, be due to ignorance on the part of the lecturers; we heard of a case the other day in which the instructor was completely fogged by the question, "How do the rear wheels, drive the engine when a worm and wheel are used ?" This gentleman's knowledge was confined to worms of the single-start irreversible variety!

IT IS now realized throughout the commercialvehicle industry that the prices of motor vehicles may be considered as having reached the lowest level consistent with even the barest margin of profit ; in fact, in many instances the prices quoted for exhibits at the Commercial Vehicle Show were based on the expectation of a fairly large output and, if sales do not eventuate in sufficient numbers, it is quite probable that, instead of further reductions, there may be slight increases.

The present prices compare very favourably with those existing in 1914, when one considers how greatly improved are the present designs and the fact that the modern vehicle can be regarded as having a life far in excess of that of its pre-war prototype. There still appears to be a certain reluctance on the part of many large and small users to purchase vehicles of which they are really in need. They hope that, by holding out for still longer, and running— probably at a loss—old vehicles, of which the maintenance costs are excessively high, the prevailing prices may be still further reduced. We consider this a very unwise policy to pursue. If they buy now they will certainly obtain full value for their money, and, in the long run, will effect. a very considerable financial saving, for the running of out-of-date vehicles is a steady and subtle drain upon financial resources, apart Tram the fact that the use of an antiquated fleet does not redound to the credit of a concern in the eyes of the public and certainly forms a very poor advertisement.

SOME MONTHS ago the Institution of Automobile Engineers issued a, questionnaire to members and, as a result, evidence was obtained that papers of a more practical and less mathematical nature would be welcome. This evidence, together with the fact that numerous informal discussions have proved an unqualified success, has been taken into account by the Council in the selection of papers, with the result that those read during the past few months have been of an eminently practical and informative character.

The value of receiving the experiences of gentlemen actively engaged in the running of fleets cannot be over-emphasized, and, during the discussions which follow, facts are often brought forward which the speakers would hesitate to set forth in cold print. We may instance the recent paper on lubricating oils reaa by Mr. Nickinson, in which the information given was only rivalled in interest by the remarks made during the discussion by such authorities as Dr. Ormitndy, Major Wheeler, Major Beaumont and others.

The membership of the Institution now exceeds 2,000, but there isi still plenty of room for expansion. Further development is certain to occur, and this will no doubt be accelerated by the progressive views and methods adopted by the president, the secretary, and the Council.