THE L.C.C. SAVES MONEY. HOW 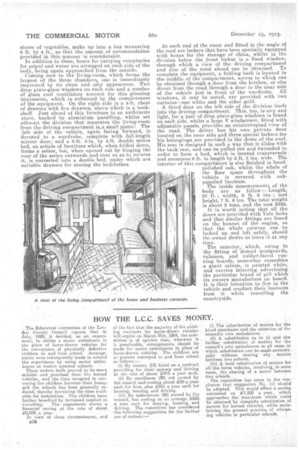 Page 18, 25th December 1923 — THE L.C.C. SAVES MONEY. HOW
Close
Noticed an error?
If you've noticed an error in this article please click here to report it so we can fix it.

The Education uommittee of the -London County Council reports that in July, 1922, it decided, as • an experiment, to utilize a motor ambulance in the place of horse-drawn vehicles for the conveyance of physically defective children to and from school. Arrangements were subsequently made to extend the experiment by using motor ambulances at twelve seleoted schools.

These motors halle proved to be snore reliable and punctual than the horsed vehicles, and the time occupied in conveying the children between their homes arid the schools has been generally reduced, thereby increasing the time available for instruction. The children have further benefited by increased comfort in

travelling. The experiment shows a financial saving at the rate of about 22,000 a year.

In view of these circumstances, and of the fact that the majority of the existing contracts for horse-drawn vehicles will expire on March 31st, 1924, the committee is of opinion that, wherever it is practicable, arrangements should be made for motor ambulanceS in place of horse-drawn vehicles. The children are present conveyed, to and from school as follows :—

(i) By motors (12) hired on a contract providing for their upkeep and -driving at the rate of about £475 a year each.

• (iii) By ambulances .(60) owned by the council, but costing on an average £285 a year each for horsing, housing and driving. Tile committee has considered -the following suggestions for the further use of motors (i) The substitution -of Motors for the hired omnibuses and the retention of the council's own ambulances.

(ii) A .substitution as in (i) and the further substitution of motors for the council's own ambulances in all cases in which substitution can be masle economically without sharing any motors between two schools.

. (iii) A total substitution of motors for all the horse vehicles, involving, in some oases, the, sharing of a motor 'between two schoOlS.

The committee has come to the conclusion that angOstiort No, (ii) should be adopted. This would effect a saving estimated at £7,500 a year, which approathes tbe, maximum which could be obtained by ,Complete substitution of motors for horsed vehicles, while maintaining the present practice of allooat.ing vehicles to particular schools.