ROLE OF THE HIGHWAYS TRAFFIC OFFICERS 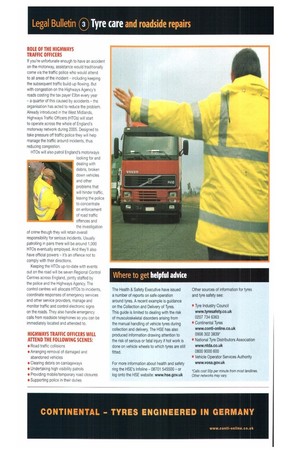 Page 26, 25th August 2005 — ROLE OF THE HIGHWAYS TRAFFIC OFFICERS
Close
Noticed an error?
If you've noticed an error in this article please click here to report it so we can fix it.

If you're unfortunate enough to have an accident on the motorway, assistance would traditionally come via the traffic police who would attend to all areas of the incident including keeping the subsequent traffic build-up flowing. But with congestion on the Highways Agency's roads costing the tax payer £3bn every year a quarter of this caused by accidents the organisation has acted to reduce the problem. Already introduced in the West Midlands, Highways Traffic Officers (HTOs) will start to operate across the whole of England's motorway network during 2005. Designed to take pressure off traffic police they will help manage the traffic around incidents, thus reducing congestion.

HTOs will also patrol England's motorways looking for and dealing with debris, broken down vehicles and other problems that will hinder traffic. leaving the police to concentrate on enforcement of road traffic offences and the investigation of crime though they will retain overall responsibility for serious incidents. Usually patrolling in pairs there will be around 1,000 HTOs eventually employed. And they'll also have official powers it's an offence not to comply with their directions.

Keeping the HTOs up-to-date with events out on the road will be seven Regional Control Centres across England, jointly staffed by the police and the Highways Agency. The control centres will allocate HTOs to incidents, coordinate responses of emergency services and other service providers, manage and monitor traffic and control electronic signs on the roads. They also handle emergency calls from roadside telephones so you can be immediately located and attended to.