Making light work Two of the drawbacks of electric batteries 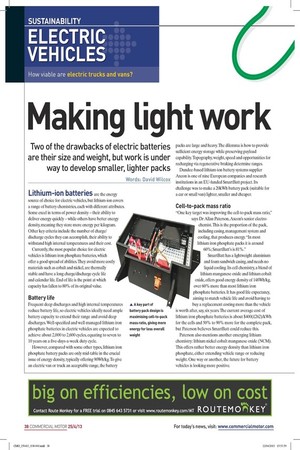 Page 29, 25th April 2013 — Making light work Two of the drawbacks of electric batteries
Close
Noticed an error?
If you've noticed an error in this article please click here to report it so we can fix it.

are their size and weight, but work is under way to develop smaller, lighter packs Words: David Wilcox Lithium-ion batteries are the energy source of choice for electric vehicles, but lithium-ion covers a range of battery chemistries, each with different attributes. Some excel in terms of power density — their ability to deliver energy quickly — while others have better energy density, meaning they store more energy per kilogram. Other key criteria include the number of charge/ discharge cycles they can accomplish, their ability to withstand high internal temperatures and their cost.

Currently, the most popular choice for electric vehicles is lithium iron phosphate batteries, which offer a good spread of abilities. They avoid more costly materials such as cobalt and nickel, are thermally stable and have a long charge/discharge cycle life and calendar life. End of life is the point at which capacity has fallen to 80% of its original value.

However, compared with some other types, lithium iron phosphate battery packs are only mid-table in the crucial issue of energy density, typically offering 90Wh/kg. To give an electric van or truck an acceptable range, the battery packs are large and heavy. The dilemma is how to provide sufficient energy storage while preserving payload capability. Topography, weight, speed and opportunities for recharging via regenerative braking determine ranges.

Dundee-based lithium-ion battery systems supplier Axeon is one of nine European companies and research institutions in an EU-funded SmartBatt project. Its challenge was to make a 20kWh battery pack (suitable for a car or small van) lighter, smaller and cheaper.

Cell-to-pack mass ratio "One key target was improving the cell-to-pack mass ratio," says Dr Allan Paterson, Axeon's senior electrochemist. This is the proportion of the pack, including casing, management system and cooling, that produces energy. "In most lithium iron phosphate packs it is around 60%; SmartBatt's is 81%."

SmartBatt has a lightweight aluminium and foam sandwich casing, and needs no liquid cooling. Its cell chemistry, a blend of lithium manganese oxide and lithium cobalt oxide, offers good energy density of 148Wh/kg, over 60% more than most lithium iron phosphate batteries. It has good life expectancy, aiming to match vehicle life and avoid having to buy a replacement costing more than the vehicle is worth after, say, six years. The current average cost of lithium iron phosphate batteries is about $400(£262)/kWh for the cells and 50% to 90% more for the complete pack, but Paterson believes SmartBatt could reduce this.