Bogus traffic wardens are beyond arm of law 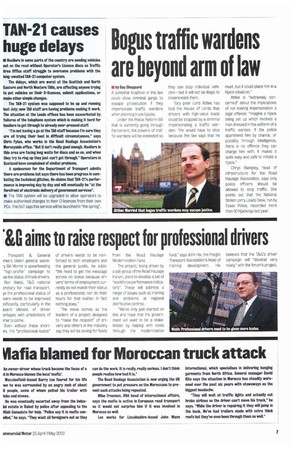 Page 7, 25th April 2002 — Bogus traffic wardens are beyond arm of law
Close
Noticed an error?
If you've noticed an error in this article please click here to report it so we can fix it.
Keywords : Parking, Road Safety, Road Transport, Traffic Warden, Traffic, Law / Crime

• by Guy Sheppard A potential loophole in the law could allow criminal gangs to escape prosecution if they impersonate traffic wardens when planning truck Necks.

Under the Police Reform Bill that is currently going through Parliament, the powers of traffic wardens will be extended so they can stop individual vehicles—but it will not be illegal to impersonate them.

Tory peer Lord Attlee has told the House of Lords that drivers with high-value loads could be stopped by a criminal impersonating a traffic warden: "He would have to stop because the law says that he must, but it could place him in a hijack situation."

Attlee is "extremely concerned" about the implications of not making impersonation a legal offence: "Imagine a hijack being set up which involves a man dressed in the uniform of a traffic warden. If the police apprehend him by chance, or possibly through intelligence, there is no offence they can charge him with. It makes it quite easy and safe to initiate a hijack."

Chrys Rampley, head of infrastructure for the Road Haulage Association, says only police officers should be allowed to stop traffic. She points out that the National Stolen Lorry Loads Desk, run by Essex Police, recorded more than 50 hijackings last year.