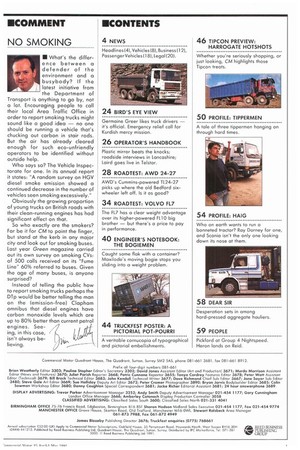 Page 3, 25th April 1991 — • COMMENT NO SMOKING
Close
Noticed an error?
If you've noticed an error in this article please click here to report it so we can fix it.

• What's the difference between a defender of the environment and a busybody? If the latest initiative from the Department of Transport is anything to go by, not a lot. Encouraging people to call their local Area Traffic Office in order to report smoking trucks might sound like a good idea — no one should be running a vehicle that's chucking out carbon in stair rods. But the air has already cleared enough for such eco-unfriendly operators to be identified without outside help.

Who says so? The Vehicle Inspectorate for one. In its annual report it states: "A random survey on HGV diesel smoke emission showed a continued decrease in the number of vehicles seen smoking excessively."

Obviously the growing proportion of young trucks on British roads with their clean-running engines has had significant effect on that.

So who exactly are the smokers? Far be it for CM to point the finger, but stand at the kerb in any major city and look out for smoking buses. Last year Green magazine carried out its own survey on smoking CVs: of 500 calls received on its "Fume Line" 60% referred to buses. Given the age of many buses, is anyone surprised?

Instead of telling the public how to report smoking trucks perhaps the DTp would be better telling the man on the (emission-free) Clapham omnibus that diesel engines have carbon monoxide levels which are up to 80% better than current petrol engines. Seeing, in this case, isn't always believing.