No Certified Figures Despite Warning 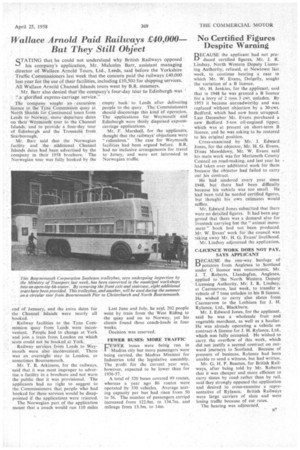 Page 41, 25th April 1958 — No Certified Figures Despite Warning
Close
Noticed an error?
If you've noticed an error in this article please click here to report it so we can fix it.
Keywords :

BECAUSE the applicant had not produced certified figures, Mr. J. R. Lindsay, North Western Deputy Licensing Authority, refused, at Newtown last week, to continue hearing a case in which Mr. W. Evans, Dolgelly, sought the variation of a B licence.

Mr. H. Jenkins, for the applicant, said that in 1948 he was granted a B licence for a lorry of 2 tons 3 cwt. unladen. By 1953 it became unroadworthy and was replaced without objection by a 30-cwt. Bedford, which had now been scrapped. Last December Mr. Evans purchased a new Bedford 3-ton oil-engined tipper, which was at present on short-term B licence, and he was asking to be restored to his original position.

Cross-examined by Mr. J. Edward Jones, for the objector, Mr, H. G. Evans, Dinas Mawddswy, Mr. W. Evans said his main work was for Merioneth County Council on road-making, and last year he had taken over additional work for them because he objector had failed to carry out his contract.

He had tendered 'every year since 1948, but there had been difficulty because his vehicle was too small. He had been told he needed certified figures, but thought his own estimates would suffice.

Mr. Edward Jones submitted that there were no detailed figures. It had been suggested that there was a demand also for livestock carrying but the "animal movement " book had not been produced. Mr. W. Evans' work for the council was taking away Mr. H. G. Evans' livelihood.

BECAUSE the one-way haulage of potatoes from Anglesea to Scotland under C licence' was uneconomic, Mr. J. T. Roberts, Llandegfan, Anglesea, applied to the North Western Deputy Licensing Authority, Mr. J. R. Lindsay, at Caernarvon, last week, to transfer a vehicle of 7 tons unladen to his B licence. He wished to carry also slates from Caernarvon to the Lothians for I. H. Rylance, Ltd., Blackburn.

Mr. J. Edward Jones, for the applicant, said he was a wholesale fruit and vegetable merchant, as well as a haulier. He was already operating a vehicle on contract-A licence for J. H. Rylance, Ltd., . which was fully occupied. He wished to carry the overflow of this work, which did not justify a second contract on outward journeys to Scotland. Because of pressure of business. Rylance had been unable to send a witness, but had written.

Mr. G. H. P. Beames, for British Railways, after being told by Mr. Roberts that it was cheaper and more efficient to carry slates by road • rather than by rail, said they strongly opposed the application and desired to cross-examine a representative of Rylance. British Railways were large carriers of slate and were losing traffic because of cut rates.