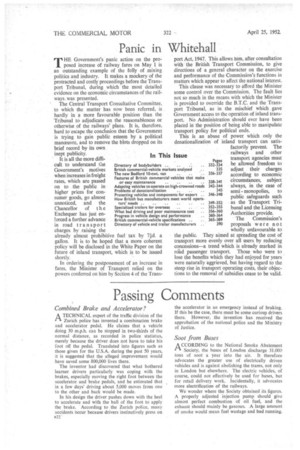 Page 60, 25th April 1952 — Panic in Whitehall
Close
Noticed an error?
If you've noticed an error in this article please click here to report it so we can fix it.

Pr HE Government's panic action on the pro posed increase of railway fares on May 1 is an outstanding example of the folly of mixing politics and industry. It makes a mockery of the protracted and costly proceedings before the Transport Tribunal, during which the most detailed evidence on the economic circumstances of the railways, was presented. The Central Transport Consultative Committee, to which the matter has now been referred, is hardly in a more favourable position than the Tribunal to adjudicate on the reasonableness or otherwise of the railways' plans. It is, therefore, hard to escape the conclusion that the Government is trying to gain public esteem by a political manceuvre, and to remove the blots dropped on its brief record by its own inept publicity.

It is all the more difficult to understand the Government's motives when increases in freight rates, which are passed on to the public in higher prices for consumer goods, go almost unnoticed, and the Chancellor of t h e Exchequer has just enforced a further advance in road transport charges by raising the already almost prohibitive fuel tax by 71d, a gallon. It is to be hoped that a more coherent policy will be disclosed in the White Paper on the future of inland transport, which is to be issued shortly.

In ordering the postponement of an increase in fares, the Minister of Transport relied on the powers conferred on him by Section 4 of the Trans

port Act, 1947, This allows him, after consultation with the British Transport Commission, to give directions of a general character on the exercise and performance of the Commission's functions in matters which appear to affect the national interest.

This clause was necessary to afford the Minister some control over the Commission. The fault lies not so much in the means with which the Minister is provided to override the B.T.C. and the Transport Tribunal, as in the mischief which gave Government access to the operation of inland transport. No Administration should ever have been placed in the position of being able to manipulate transport policy for political ends. This is an abuse of power which only the denationalization of inland transport can satis factorily prevent. The railways and other transport agencies must be allowed freedom to adjust their charges according to economic circumstances, subject always, in the case of semi monopolies, to public safeguards such as the Transport Tribunal and the Licensing Authorities provide.

The Commission's proposals w er e no t wholly unfavourable to They aimed at spreading the cost of transport more evenly over all users by reducing concessions—a trend which is already marked in read passenger transport. Those who were to lose the benefits which they had enjoyed for years were naturally aggrieved, but having regard to the steep rise in transport operating costs, their objections to the removal of subsidies cease to be valid. the public.